May 1, 2011
Richard was the first person to systematically popularize the mysterious topic of underground, and then underwater, bases and tunnels by delving into the open literature of the government, military and industry paper trail. Beginning in early childhood he experienced first-hand contact with a variety of paranormal phenomena that left him thoroughly persuaded that there is much more to the Earth and to human perception and consciousness than our cultures believe. Some of Richard's favorite research and reading interests are underground and underwater bases and tunnels, electronic mind control, Freedom Technology, UFOs, human prehistory and remote antiquity, international politics, the Kundalini energy and alternative thought patterns. Richard has a B.A. in sociology, an M.A. in Latin American studies, an M.S. in forestry and a Ph.D. in political science. In this interview, Richard shares information he received while on an ayahuasca journey in South America. He emphasizes the seriousness and purpose of taking ayahuasca. It was revealed to him that the planet is under nuclear assault. The nuclear industry is waging war on the planet. There is an agenda taking place to destroy the human spirit, to bring us to the lowest status and to kill all biological life in the galaxy. The source of this agenda has been in the shadows for thousands of years. Richard shares what is behind the agenda and why. In the second hour for members, Richard begins talking about Japan and how the disaster was set up to occur by those who built the nuclear facilities, set them up and maintained them. Moreover, those who plotted to build the nuclear plants on the coastline. Sauder explains why we have no future with nuclear technology. He presents what he sees as the only future. Why have technologies that can clean up radioactive waste been held back? Why are our governments saying "everything's fine" in terms of radioactive food contamination? Richard suggests why. In terms of our prison planet scenario, he says it is time to speak out, stand out and use your legs before they are taken away. Then, he talks about the collective karma, our present situation and the Earth & Sun being tied in with human consciousness. According to Richard's research, we're in a period of more earthquakes and more catastrophe. Later, Richard talks about cleaning our bodies and minds and staying clear. Regarding the safest place to live, he says it is not where you live but who you are. Topics discussed: the borg mentality, dirty fission reaction, fifth column, physical preparations, karma, war, economic crashes, sun activity, CME, the future and more.

Radiation Spreads throughout the Northern Hemisphere

Hidden In Plain Sight - On Beyond The X-Files

In A Secret Paris Cavern, The Real Underground Cinema

7 Underground Wonders of the World: Labyrinths, Crypts, Catacombs and More

Hidden in Plain Sight: Beyond the X-Files

Underground Bases and Tunnels: What Is the Government Trying to Hide? 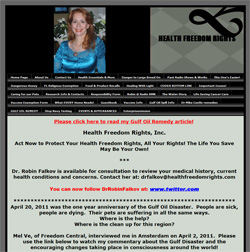