Sep 18, 2008
Geoff Stray has been studying the meaning of the year 2012 since 1982. Around 1996, he started to compile the information into a booklet called Beyond 2012. In September 2000, he made it available on the internet via the website Diagnosis2012. Since then, Diagnosis2012 has become renowned as the most comprehensive database available on 2012, and has gathered input from every corner of the globe. In his spare time, he makes handmade footwear, rides a dirt bike and “plays the blues harmonica to passing sheep”. For the first hour of this program, Geoff Stray talks about all things related to 2012. We begin by discussing Geoff’s background and website. Then, we discuss the main points of his book, "Beyond 2012: Catastrophe or Ecstasy - A Complete Guide to End-of-Time Predictions". What are these prophecies, and how reliable are they? How many other cultures share the predictions? What modern science exists to back them up? What should we really expect in the year 2012? For our members, we continue our conversation with Geoff Stray and talk about the crop circle phenomena and the connection to 2012. We also talk more about plasma, ball lightning, energy from outside the solar system, sentient entities and solar activity. Geoff shares his opinion about 2012 and more.

Beyond 2012 Catastrophe or Ecstasy Article

The Mayan and other Ancient Calendars on Amazon.com

The Mayan and other Ancient Calendars on Amazon UK

The Invisible Landscape: Mind, Hallucinogens, and the I Ching 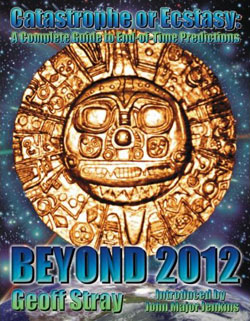