Jul 20, 2015
Mikkel Clair Nissen is a Danish anti-collectivism activist and author of the book, “Manipulism and the Weapon of Guilt: Collectivism Exposed." The book exposes Denmark, the supposed happiest nation on earth, for what it truly is: collectivism's biggest propaganda hoax. Mikkel, who joins us following his recent parting from Europe, is now traveling around the US to promote his book and create a new life. Our discussion begins with a glimpse into the array of totalitarian ideologies that have crept into Scandinavia through the rulership of psychopathic narcissists. Mikkel explains how poor personal boundaries have formed the basis of this dysfunctional society, where people are caught up in a malignant state of degrading and policing each other, creating a vicious cycle of subjugation, of which the government takes great advantage. We discuss the serious illness of cultural Marxism in Western culture, which has created societies in a state of arrested development fueled by envy, egoism, and a lack of responsibility. We talk about the Fabian indoctrination of children through the education system and pop culture, where individuality is stripped away, resulting in more energy (tax) for the bourgeoning monoculture organism. In the members’ section, Mikkel shares his philosophy of individualism and highlights the five elements of leftism. We get into the government’s infringement on the right to homeschool children that seeks to further divide the family structure in the west, along with the left’s political strategy of billing traditional family values as a fascist dictatorship. Mikkel describes what it’s like living in the collectivized climate of Scandinavia, underscoring the phenomena of fear, guilt and refusal to accept failure that keeps people enslaved within inferiority complexes and broken social systems. The conversation gets interesting when we consider the eroding effect that mass immigration has on small, traditional European countries and the foundation of the American dream.

Manipulism and the Weapon of Guilt: Collectivism Exposed 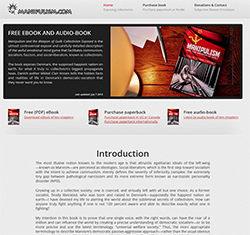