Mar 28, 2013
Matt Presti and Robert Otey have teamed up to disseminate the cosmology of Dr. Walter and Lao Russell. Matt and Robert produced a video series explaining in great detail, the collective works of Dr. Walter and Lao Russell; specifically the final distillation of the science and philosophy as written in the book "Atomic Suicide." Walter Russell was an American polymath and a natural philosopher known for his unified theory in physics and cosmogony. Dr. Russell said that one of the best things to ever happen in his life was "being taken out of school before he was ruined," which allowed him to conceive his "knowing" within the light of Universal Mind (The Creator) directly. In the first hour, we’ll discuss Russellian science, which presents a new concept of the universe, one in unity with nature and the Creator. In the second hour, we delve into more detail on the principles of creation and the nature of our universe. Robert critiques the academic sciences, including quantum physics and the new age ideas which have sprung out of it. We’ll also hear about Frank Chester’s empirical research proving the validity of Russellian science. Later, we’ll discuss Walter Russell’s blueprint for a free energy device and his proposal to NORAD in the 1960’s. The hour ends on a discussion about psychopaths who uphold "explodemia science." 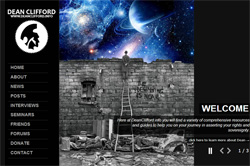