Dec 30, 2015
Robert Otey has spent the past 25 years doing research into alternative Cosmology. He is behind the YouTube channel, 77Gslinger, where he has close to 700 videos relating to the Electric Universe, Sacred Geometry, Cymatics, and the work of Walter Russell, Viktor Schauberger, DB Larson, Nikola Tesla and others. Otey is the author of two books, “Free Energy and Free Thinking” and “Gravity is a Myth and Does Not Exist; Electricity is the Only Force in the Universe.”

Robert begins with an overview of the convincing evidence he has discovered that contradicts and debunks the flawed theoretical gravitation based/big bang cosmogony taught in academia. He states that his enormous body of work proves this is in fact an electric universe based upon the foundations of sacred geometry. He gives credit to the revolutionary free energy discoveries made by Schauberger, Tesla, Moray, and others who discarded the false models of explosion based, fuel sucking technology upheld to render astronomical profits for the world’s energy barons, war mongers and central bankers. Robert explains the main proofs behind the electric universe model and how these elements produce the effect we know as gravity. We discuss the model of magnetism, the field of quantum physics, and the nuclear atom theory. Robert talks about the two main foundations of quantum mechanics, The double-slit experiment and the Heisenberg’s uncertainty principle. We look at the idea of relativism in science and the deceptive language of mathematics, along with the history of Einstein and his manufactured science. Further, we consider the birth of the Nobel Prize scene and the corresponding rise of National Socialism in Germany.

In the member segment, Otey gets into the heavily ethnocentrically promoted arena of Jewish inventions and the mythical “genius gene” that is supposedly responsible for a huge proportion of Nobel Prize winning scientific discoveries in physics. We discuss the cultural Marxist infiltration of academia and the shameless bid for control through junk technologies that is destroying Western civilization. We look at the achievements of Victor Schauberger, a nature based scientist from a long lineage of foresters, who engineered sophisticated tools based on his observations of the power of implosion. Robert touches on the subject of radiation and the nuclear scare scam that he says needs reexamining. We give some critical thought to the viability of free energy and what has been keeping this Earth preserving technology from replacing the current, colossally costly applications. Later, we examine the credibility of popularly upheld scientists like Carl Sagan and Stephen Hawking, and we speculate as to why the bulk of modern scientific developments are keyed in on intensifying the death grip of control on humanity.

Free Energy and Free Thinking
Electric Universe: Gravity is a Myth and Does Not Exist, Electricity is the only Force
The Gravity Myth
Magnetism vs Electricity
The Electric Sun is not a nuke fusion furnace
Space News from the Electric Universe
Frank Chester and his Discovery of the Chestahedron
DB Larson: “The Case Against the Nuclear Atom”
Dewey B. Larson disputes current day atomic theory
Larson's Reciprocal System
The Manufacture and Sale of Saint Einstein by Christopher Jon Bjerknes
Plagarist of the Century: Albert Einstein with Christopher Bjerknes
Everything is the Light – Interview with Nikola Tesla
Nikola Tesla
Bibhas De Physics in the Age of Fakery
Pari Spolter, debunking Newton's so-called Law of Universal Gravitation
“Gravitational Force of the Sun”, by Pari Spolter
Quantum Quackery demolished by Robert Otey
Quantum Quackery of Quackademia
Quantum Flakiness for the New Age Movement
Quantum Quackery in a Nut Shell
Viktor Schauberger
Dark Matter Debunked
The Arm Chair Physics of Kinematics
The Electric Universe by Thunderbolts of the Gods
The Essential Guide to the Electric Universe
Electric Universe
Richard Feynman, Super Genius of Quantum Quackery Fails on Magnetism
Bill Gaede - Einstein's Idiots
You Stupid Relativists by Bill Gaede
Bill Gaede debunks the Double Slit Experiment
The E=MC Squared Mythematical Theory
Einstein's Cosmogony
The Structure of Atoms and the String Theory Fraud
Math is not the Language of Nature
A Review of Stephen W. Hawking’s A Brief History of Time
Hawking exposed and ridiculed for being a meat puppet shill for tptb
Quasar Quacks: Why Einstein is Wrong
The academic religion of Psyence
Vortex Basics and Fractals from the Subatomic to the Super Galactic
More on the Electric Sun
Big Bang and Black Holios Debunked

Gravity is a Myth and Does not Exist; Electricity is the Only Force in the Universe 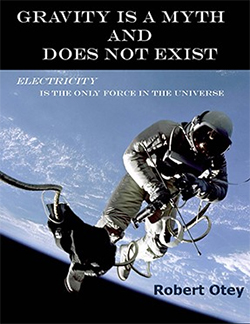