Crop Circles, The Era of Turmoil, The Energy of Hope & The Alien Agenda

Apr 26, 2009
Andy Thomas is one of England's most prolific authors and lecturers on unexplained mysteries, and speaks widely in the UK and abroad. Andy is author of seven books exploring the unexplained, including the acclaimed “Vital Signs: A Complete Guide to the Crop Circle Mystery” (1998, revised 2002), which has been described by many as the definitive guide to the subject. He has written for many publications, and regularly contributes to the popular alternative journal Nexus Magazine. Also, he is the founder of Vital Signs Publishing. Andy's latest - and most major - investigation into the mystery realms, “The Truth Agenda: Making Sense of Unexplained Mysteries, Global Cover-Ups and 2012 Prophecies”, was published in summer 2009. For the first hour of this program, Andy begins talking about crop circles. Then, he talks about the new world order and the era of turmoil as well as the energy of hope. Topics Discussed: crop circles, multilayer mystery, geometrical patterns, manmade circles vs. "real" circles, mysteries of the crop circles as a springboard into other areas of research, control, centralized government, technological control, legal control, mass media control, entertainment trivia, TV, news stories, awake vs. dumbed down, spiritual and physical health, climate of fear, swine flu scare, overpopulation, Baxter vaccines, banking crisis, "New Anarchy", Tamiflu, Barrack Obama, global consciousness and being armed with awareness. Tune into our second hour with Andy as we talk about the importance of diversity, a flexible perspective and the need to go into fringe areas of research. We'll also talk about the elite and elaborate on the idea if they truly are a superpower. Then, Andy discusses the inconsistencies of 9/11, the weapons of mass destruction lie and the alien agenda question. Topics Discussed: depopulation, Georgia Guidestones, the agenda of control, elite, Illuminati, the 9/11 sacrifice, the "need" for a clear enemy, are "they" a large or small group?, Bilderberg, Trilateral Commission, occult beliefs, cremation of care, UFO's, alien contact, visions of the future, OBEs, The Disclosure Project, government knowledge of E.T., Ed Mitchell and the alien disinformation agenda, what is "truth", evolution vs. the Bible, Richard Dawkins, lunar landing anomalies, collective consciousness, the G20 "riots", agent provocateurs, does the current system need to be reformed or demolished?

The Field: The Quest for the Secret Force of the Universe

Is Swine Flu A Biological Weapon?

Vital Signs: A Complete Guide to the Crop Circle Mystery and Why It is Not a Hoax 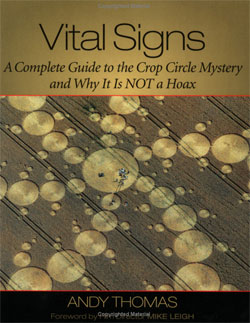