May 1, 2008
Gary A. David has been intrigued by the Four Corners region of the United States since his initial trip there in 1987. The following year he lived for about six months in northern New Mexico, where he studied rock art and indigenous ruins. In 1994 he moved to Arizona and began an intensive study of the ancestral Pueblo People (sometimes incorrectly referred to as the Anasazi) and their descendants the Hopi. In late 2006 after more than a decade of independent fieldwork and research, his nonfiction book “The Orion Zone: Ancient Star Cites of the American Southwest” was published by Adventures Unlimited Press. This volume describes a pattern of Hopi villages and ruin sites that precisely mirrors Orion, with an ancient site corresponding to each major star in the constellation. The sequel published in early 2008 by Adventures Unlimited is titled “Eye of the Phoenix: Mysterious Visions and Secrets of the American Southwest”. In the first hour of this program, Gary begins discussing his book, "The Eye of the Phoenix". We talk about the Orion correlation, Hopi Indians, mythology, traditions and various sites around the high desert of Arizona. This book deals with diverse topics such as: Hopi Kachinas, Ant People, meaning of Anu, cataclysms, 4th world - moving into the 5th, The Snake People, Dog Star People, Sirius, The Knights Templar and Arizona Knights Templar Crosses and much more. For our members interview, Gary talks about the meaning of the Eye of the Phoenix, the Freemasonic connection and the Maltese (Templar) crosses and Swastikas found on Hopi rock art. More Topics Discussed: pyramids of Arizona, catastrophe, comet in 1054 and volcano in 1064, the World Cross, Tibet connection, the ancient global culture, similarities in the first languages, word roots, runes found in America, plasma mythology, Aztlan, Benu, Papago Park and much more.

Along the 33rd Parallel: A Global Mystery Circle

Eye Of The Phoenix 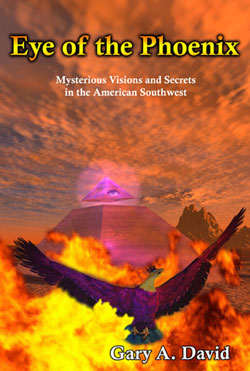