May 13, 2015
A professional writer since 1975, Michael Walsh provides international media with articles covering human, global and political issues. He joins us to speak on the subject matter of his latest books, “Heroes Hang When Traitors Triumph” and “Heroes of the Reich.” In the first hour, Mike gives an overview of the negative propaganda surrounding the period of the Russian Revolution to the end of Nazi Germany. We consider why it is essential to look back to the stories of the defeated during this time frame when scrutinizing the post-WWII reconstruction era controlled by the banking system and mainstream media. Mike takes us back to the story of the iconic Lawrence of Arabia, a highly principled man who was deeply opposed to a war with Germany and ultimately removed from the equation. Then, we discuss Britain’s track record of widespread meddling and backstabbing and its pro-WWII lobby campaign that set the narrative against the Germans despite an overwhelming opposition to the war by her people. Mike identifies how the supposed evil ideology of Hitler could have been so attractive to intelligent academics during his chancellorship, and why so much conflicting propaganda popped up around Germany, who at the time was one of the most prosperous countries in the world. We move on to deliberate the globalist program of suppressing the best expressions of mankind, such as the heroic Norwegian figure Vidkun Quisling, who was a champion for the Ukrainian people and later vilified by hypocrites. In the second hour, we delve deeper into the story of Holodomor, the genocide of ethnic Ukrainian people carried out by the Soviet Union. Mike explains how the Bolshevik occupied Russia robbed and starved the Ukrainians as a means to repay Wall Street for financing the Russian Revolution. Later, we look at today’s shifting political narrative and the watering down of negative publicity encircling violent and radical factions that are being used for NATO’s ends. We also discuss how National Socialism could have been seen as the only viable option in the fight against Communism and, conversely, how Communism once seemed to be a feasible way out of the suffering brought on by Capitalism. At the end, we compare the current state of the EU and US to what was happening in the Eastern Bloc 25 years ago, emphasizing the importance of reconciling the past century of history in order to understand the root of our present identity crisis.

Heroes Hang when Traitors Triumph: Heroes Hang when Traitors Triumph questions the wisdom of defaming Europe's most gifted men simply because they ... go some way to restoring their reputations
The All Lies Invasion: The political and media conspiracy of lies spun over the Iraq, Afghanistan and Libyan conflicts are well known. Less well ... expose is a page-turning attention grabber.
Heroes of the Reich Volume One: To mark 70-years since the Second World War's end, Heroes of the Reich avoids victors propaganda. Heroes is a ... by their loyalty to the Reich. (Volume 1) 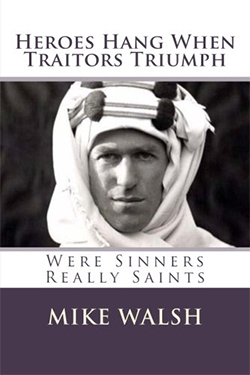