Jun 2, 2014
Harry Cooper is the founder and President of Sharkhunters International, an organization dedicated to U-boats and World War II history. The group was started in 1983 and today the organization has around 7,800 members in 76 countries. The organization professes to include some high profile political and military members. Cooper is a military veteran, former race car driver and expert in WWII and National Socialist (Nazi) history. We’ll discuss the formation of Sharkhunters and the compelling evidence regarding Hitler's escape to South America, that came from a Spanish spy named Don Angel Alcazar de Velasco. Angel’s testimony included a 114-page, single-spaced letter that told of his experiences in the “Führerbunker” with Adolf Hitler and Eva Braun. Alcazar claims to have witnessed the couple forcibly drugged under orders of Party Chancellery Martin Bormann, then removed from the bunker and taken to South America. We proceed to discuss the escape route and how they ended up on the Brazilian island Trindade and how they set up consequent villages and small towns in South America. Cooper tells us of the many witnesses he encountered in his travels to South America, and those who have claimed to have seen Hitler alive and well after the war. Harry also visited the house in Patagonia, Argentina where it’s said that Hitler lived for many years. Cooper asserts that the intelligence community knew that Hitler did not die in Germany. The FBI and CIA allegedly knew Hitler was living in Argentina from 1945 onward. Later, we discuss Villa Baviera (Colonia Dignidad), the Nazi Bell and the Neu Schwabenland Antarctica expedition. 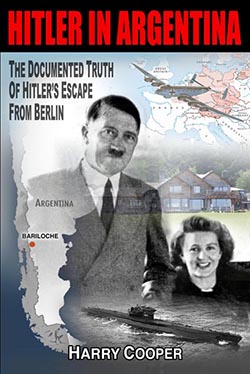