John Morgan is Editor-in-Chief and co-founder of Arktos Media. He is also one of the editors of the new Right On website. Greg Johnson is Editor-in-Chief of Counter Currents. He is the author of "Confessions of a Reluctant Hater," "New Right vs. Old Right," and the newly published “Truth, Justice, & a Nice White Country.” Daniel Friberg is a founding member of the Swedish metapolitical think-tank Motpol. He is also the co-founder and CEO of Arktos Media and author of "The Real Right Returns.” Richard Spencer is President of National Policy Institute (NPI) and Editor of Washington Summit Publishers and Radix Journal. Ramzpaul is known for his iconoclastic YouTube channel that mocks cultural Marxism and pokes fun at the establishment and contemporary politics through satire and humor.

For this roundtable, we bring together some notable and recognizable figures in the Alt Right scene. We begin by looking back on 2015, a year when we witnessed unprecedented chaos in Europe and a remarkable Western culture awakening. We discuss how an array of events – from the refugee crisis in Europe, to the Ferguson and #blacklivesmatter riots in US, and the Paris attacks – all spurred on a mass realization that the tired left/liberal and mainstream conservative aphorisms and tactics have lost traction. Richard speaks to the inspiring numbers of new people that are being “red-pilled” every day, which has resulted in a high demand for a completely new alternative to the bankrupt mainstream. We look at ways in which we can drive the Alt Right movement in a positive direction and offer a tangible vision for those who are craving something new. Greg describes how ideas coming out of the Alt Right, like the Cuckservative meme, are now driving mainstream debates, and Daniel emphasizes the importance of focusing on metapolitics as a means to shape a cultural cleanup. Then, we get into the differing concepts of White Nationalism and Ethno Nationalism, and whether or not Europe has something to learn from America in terms of racial identity, or if breaking up into separate, sovereign nations is the answer to the ages-old Western ethnic rivalry.

In the second hour, Ramzpaul explains how he employs a comedic slant to get around censorship while conveying his message in a nonthreatening way. We discuss the tremendous opportunities that exist in the Alt Right for talented individuals to produce low-cost media content with a core message, and brainstorm ways to encourage meetups, community building, and the recruitment of other like-minded folks to support and join the cause. We talk about some of the obstacles that we face with censorship policies on social networking platforms such as Facebook and Twitter, as well as the excellent propaganda that is generated from controversies that end up being covered by the MSM. We get into the power of trolling, the great advantage of the decentralized nature of the Alt Right, and the fact that this instinctually driven movement is the sexiest alternative to any snively SJW popularity contest. In closing, John emphasizes the exciting prospect that the Alt Right is well on its way to becoming the new counter culture, as it is by far the only true opposition with true rebel status.

Uncuck The Right - On the Alt Right 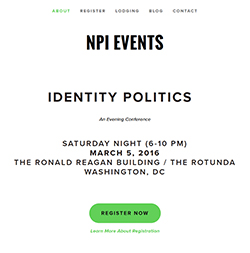