Apr 10, 2015
Mike Cross is the author of the Freedom from Conscience book series that discusses psychopaths and their relation to politics, society and personal relationships. Mike is a resident of Stockholm and teaches psychology and international finance. He returns to Red Ice Radio to discuss psychopathy, societal control by the elite, and how to break away from the conformity that has western society within its grip. In the first half, Mike describes the basis of the main character of his books, an anti-heroine politician who embodies many traits associated with psychopathy. The story of her journey serves to expose the deep corruption in government, helping the reader to understand how psychopathy works in the real world. We consider the mechanism of guilt in the social order and the lack thereof in the elite class that runs society. Mike illustrates how the machine of consumerism is fed by irrational desires that are bred into our subconscious through the conditioning of acceptance. We talk about the difficulties in breaking patterns that go against the norms of the masses and the importance of connecting with others who share alternative values in order to disconnect from the globalist agenda. In the members’ hour, we contemplate the issue of low birth rates in the west and the deeper question of why there are forces aimed at getting people not to have children. Mike outlines the work of Edward Bernays, who greatly influenced America’s shift to materialism and turn to consumerism as a religion. We reflect on changing birth rates around the globe, the promotion of population control, and the media’s anti-family viewpoint that has infected the ideals of families and would-be parents. Further, we ponder the consequences of population replacement migration, along with the psychological issues that result from the masses living clustered together in cities where there is no spiritual connection to the land, the past or one’s heritage. We look at the reflections of idiocracy showing through in our modern cultures and psychopathic world of politics, and we wrap up with a call for proudly honoring and preserving the awesome ancestral spirit and lineage of the human race.

michaelcross.net
Consuming Kids: The Commercialization of Childhood (2008)
Civilizations and its Discontents by Sigmund Freud
Ex-CIA Analyst Ray McGovern Beaten, Arrested for Silent Protest at Clinton Speech
Hillary Clinton on Gaddafi: We came, we saw, he died
Why the Ukraine Crisis Is the West’s Fault
Modern art was CIA Weapon
Edward Bernays – Architect of the Consumer Mind
Media and the Fertility Transition in Developing Countries (Guest Lecture by William Ryerson)
Replacement Migration: Is It a Solution to Declining and Ageing Populations? 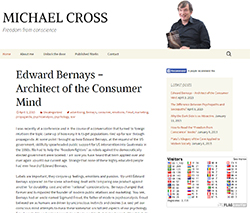