Mjolnir: Art of the Right

Sep 9, 2015
David Yorkshire is the pen name of an academic and teacher who has lived and worked in several European countries. He is also a published poet and is the editor of Mjolnir Magazine, a print magazine he created to showcase the Eurocentric illiberal arts. David joins us to share his views regarding the state of art in modern society and his vision for Mjolnir and Western culture. He begins by outlining the path that led him to abandon politics and work towards a revival of vibrant, traditional European creativity in response to the leftist propaganda permeating the arts. We discuss deconstruction theory and how the mentally perverted ruling elite have sponsored several generations’ worth of contemporary anti-art. David describes what he calls a "revolutionary traditionalist" ideology, and he reasons where conservatives, progressives and liberal leftists have danced around their radical ideals to the point of stamping out the primal instinct to preserve, protect and procure indigenous Eurocentric values. David also offers some criticisms of British Nationalist organizations and their methods of activism, and he gives suggestions for changing the social discourse through making art and engaging people in traditional, parallel structures. In the members’ segment, we consider the innate desire to admire traditional, classical and beautiful art and the small minority that finds the leftist garbage art appealing. David talks about the elitist nature of truly great art, where extraordinary excellence offers the average human a pinnacle of achievement to strive towards. We look at the pervasiveness of European creative intelligence throughout history and the contradictory Eurocentric view that all of humanity values intelligence equally. We reflect on the disappearance of hero worship in today’s cultural reference frame, abandoned for the celebration of the victim and underdog. David emphasizes the need for embracing the spirit of our ancestors, who achieved great mental strength through honing artistic skills. Then, we debate the importance of aesthetics in defeating the nihilist war on national identity. Later, David speaks to the importance of mainstream film in molding the masses, subversive Semitic messages in the Star Wars and Lord of the Rings trilogies, and the rise of radical leftist comedy in the 1970s. 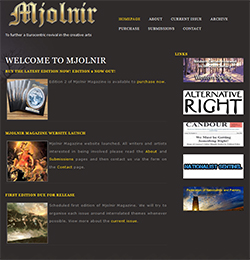