Oct 21, 2007
L. A. Marzulli is the author of the “Nephilim Trilogy”. The “Nephilim Trilogy” made the CBA best sellers list and continues to thrill readers a decade after the first book in the series was published. Marzulli is also the author of the non-fiction work, “Politics, Prophecy & the Supernatural”. Lynn packs a hard hitting expose of how the current political landscape may bring about ancient Biblical prophecies, which then may trigger supernatural events that are foretold in the book of Daniel and Revelation. During the first hour of this program, author Lynn Marzulli discusses his “Nephilim Triology” and "Politics, Prophecy & the Supernatural". He integrates biblical predictions, historical observations and scientific facts. Marzulli explores the carefully detailed and documented history of ancient prophetic writings and the ongoing supernaturalism -- UFOs, the Fatima apparitions of 1917, Crop Circles and more -- blending these seemingly unexplained phenomena with increases in paranormal activity and "signs in the heavens," which he believes points to a coming great deception and Luciferian end game. We continue in hour two for our members, discussing a variety of topics such as psychotronic weapons, Iran, The Shroud of Turin, the Merovingian heresy and Jesus & Mary.

King of the Hashemite Kingdom of Jordan 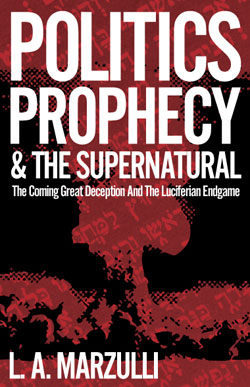