Nothing Trumps the Invasion & NPI Event

Oct 19, 2015
Richard Spencer is President of The National Policy Institute (NPI) and Editor of Washington Summit Publishers and Radix Journal. He attended University of Virginia and University of Chicago and was a doctoral student at Duke University before dropping out to pursue a life of thought crime.

Richard joins us in anticipation of Become Who We Are: The Identity and Spirit of Our People – an all-day, one-track conference hosted by NPI on Saturday, October 31, 2015, taking place at The National Press Club in Washington, DC. This event will focus on the importance of the Nationalist movement coming together as a community, face-to-face in the real world, to facilitate networking and socializing. Richard speaks about the timing of this movement and what is giving it momentum, including the reality of the dispossession of European people through refugee invasion, the criminal behavior of morally bankrupt politicians, and average people awakening to the raw deal of the status quo. We talk about the role of Donald Trump in de-legitimizing the conservative movement, his representing of the GOP, and the politically incorrect path he has blazed with his bold attitude about racial and cultural issues. We also look at the polarizing racial elements of candidates Bernie Sanders and Hillary Clinton, and the possible coming era of post-White politics and a new kind of socialism. Richard highlights the mirror-like qualities of capitalist America and socialist Russia, and he emphasizes how the Syrian refugee crisis is a blessing in disguise that is leading Nationalists toward a better understanding of themselves.

In the members' segment, we consider what the future holds for European descendants that are experiencing a loss of domestic rights and control, cultural sterilization, and the homogenization of ethnic differences. Richard says that Europeans and Americans have been too comfortable and caught up in fantasies of universal peace, liberal values, and capitalism for all, and now the international allure of decadent Western nihilism is responsible for inviting in the negative aspects of multiculturalism. We discuss how to reawaken the revolutionary European spirit and inspire creative visionaries and the bourgeoisie alike to seize opportunities in advancing the Nationalist movement. At the end, we reflect on individual psychological changes that occur upon awakening to the reality of the racial war that is overturning society. 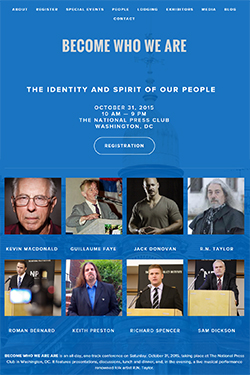