Colin McKay is an Australian born entrepreneur living in New South Wales. From 2010-2014 he blogged on finance, economics, and Australian politics and in 2010 he served as board member and bookkeeper for the Center for Economic Stability. In 2011 he presented his own concept for Deror, an alternate currency ecosystem where "everyone is their own central banker.” McKay blogs at Psalmistice.com and is presently writing a book tracing the foundations of double-entry accounting to ancient Semitic cults.

Colin is with us to provide a detailed overview of his essay “The Money Shot: Even Banking Is All About Sex,” which presents the history and mechanisms of el modo vinegia (“the Venetian method”) of double-entry bookkeeping. He explains how this Hermetic-Kabbalist system for calculating debts that was formalized during the early Renaissance period has been used for deliberately concealing the immoral practice of usury in the banking system. Colin describes how the ancient Semitic worship of the androgynous goddess Inanna-Ishtar and the principle of the unity of opposites (male/female, order/disorder, creation/destruction), used in combination with trickery in the form of deceitful words, is the fundamental underlying concept of creating “money” out of nothing. He illustrates how this “magick” is represented by the Hermetic-Kabbalist alchemical symbol of the hexagram (Seal of Solomon) and breaks down the two-sided, sexual nature of the process at the heart of usury. Then, we discuss Professor Richard Werner’s investigations of the central banking system in Japan and his legal perspective of credit. Colin also talks about the practice of money lending within the Catholic church and the 14th century transformation of modern banking that occurred when the church adopted the Venetian method.

In the members’ segment, Colin addresses the importance of understanding the mechanisms of the central banking system and the creation of credit by private banks. He explains how the predatory banking system’s core fraud revolves around the changing of labels that lead borrowers to mistake substance for form. Then, Colin introduces his alternate currency, Deror, an honor based system that can be understood by looking at ancient Cuneiform record keeping, which used a bartering system of IOUs overseen by central authorities such as temple priests. He lays out how the algorithm works on the concept of a triangular balance sheet, with credits on one side, debts on another, and an honor rating at the top, and he gives examples of the exchange as a social interaction based on trust. Colin says the idea behind this system is that everyone is able to be a “money god” with infinite potential to create money. Later, we look at the idea that Bitcoin shares similar problems with conventional money in that its worth is based in a value that can be increased through saving rather than spending. At the end, Colin illuminates the occult concept of expanding or lengthening balance sheets as a metaphor for the power of lenders over those they manipulate.

psalmistice.com
The Money $hot: Even Banking Is All About Sex
@DerorCurrency
deror.org
Richard Werner speaking in Moscow on the Central Bank issue
Princes of the Yen: Central Bank Truth Documentary
Richard Werner
Princes of the Yen: Japan's Central Bankers and the Transformation of the Economy (East Gate Books)
Can banks individually create money out of nothing? The theories and the empirical evidence
How do banks create money, and why can other firms not do the same? An explanation for the coexistence of lending and deposit-taking
A lost century in economics: Three theories of banking and the empirical evidence
Hermeticism
On Principal And Interest, Hermetic Magick, And The Lords of Time 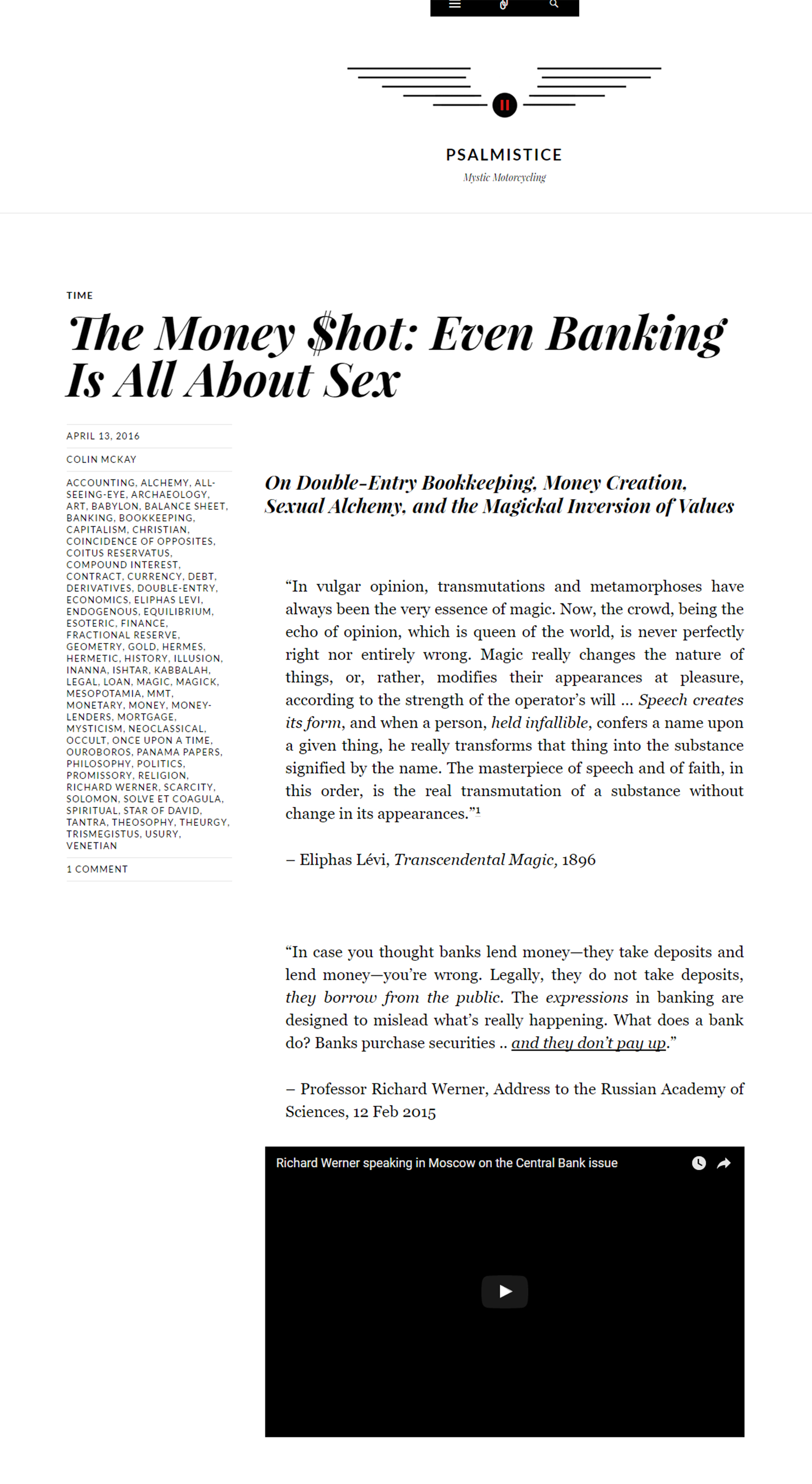