Jan 4, 2016
Christopher Cantwell is an activist, writer, talk show host, and satirist originally from New York. Now living in New Hampshire, he hosts the Radical Agenda, discussing news and issues from a pro-white anarcho-capitalist perspective. Chris is the former co-host of the nationally broadcast radio show Free Talk Live, and his writing has been syndicated on Lew Rockwell, Economic Policy Journal, A Voice for Men, and numerous other publications pertaining to philosophy, politics, economics, race, and gender issues.

Christopher first gives us a glimpse into the path that led him towards what he calls “common sense extremism,” which started with his involvement in the Free State Project, and later a journey down the rabbit hole of race issues. He asserts that left-leaning libertarians have an illogical association with the original and true philosophies of libertarianism that are based in the idea of private property societies. We discuss the faulty concept of open borders and the government’s program of mass immigration that is being fueled by economic incentives for cheap labor. Christopher addresses the adverse conditions that “diversity” generates when introduced within largely homogenous societies, and we consider whether or not the libertarian faction has the tenacity to stand up against subversive forces like Islam. Then, Christopher explains the r/K selection theory in relation to the proportions of liberals, conservatives and libertarians, and he links the subsidization of birth control and abortion to shrinking White populations. We also look at the definition of genocide and the UN’s planned demographic transformation of Europe, along with the realities of self-segregating cultures.

In the members’ hour, Christopher gets into the center of the problems that are tearing apart Western civilization, namely the enemy of liberty, democracy, and the misleaders who are promoting social engineering programs designed to dumb down the masses. We talk about the Obama phenomenon and how his two-term victory could be chalked up to successfully appealing to the US’s lowest common denominator. Chris gives his perspective on the candidates for the upcoming US presidential election, focusing on how Trump’s rhetoric on immigration and race issues is helping to shift the Overton window. We chew over the conditions creating the divide that exists between left and right-leaning libertarians, and we contemplate what it will take to get the libertarian crowd to fully grasp the idea of White genocide. Christopher expresses some concerns with the Alt Right movement’s lack of focus on free market economics, and he gives props to its ability to drive a cultural dialogue that is unhindered by taboo subjects. Later, we look at the incredible potential for the West to retransform its culture and take back its power from the global elite.

U2 - With Or Without You 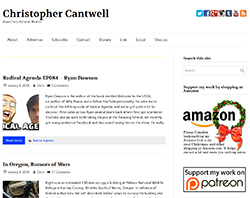