Jun 29, 2015
Curt Doolittle is an American entrepreneur and author living in Kiev, Ukraine. He is an independent theorist of political economy in the conservative libertarian tradition, and founder of the Propertarian Institute. Curt is with us to share his work surrounding Propertarianism, which can be defined as the philosophy of truth telling and a response to conservatives’ lack of a rational and scientific language for discussing the evolutionary strategy of ancient Western civilization. Curt begins with an overview of the framework of Propertarianism and reasons why truth telling has historically given European society a competitive edge. He explains the differences between high-trust and deceit oriented cultures, distinguishing the costs of truth telling vs. lying. Then, we discuss the various reactionary movements that emerged from the failed Enlightenment project, each riddled with a desperate attempt to hold onto the past while utilizing inoperational sciences, resulting in over a century of costly pseudoscience. Curt emphasizes that Anglo Europeans operated for thousands of years in extremely high-trust societies, and this gave rise to a lack of healthy skepticism when confronted with a new age of mass media, propaganda, and deceit. He adds how franchising women into politics paired with an influx of immigrants from low-trust societies topped off with the idealism of political correctness all changed the moral landscape of the west. In the members’ segment, we talk about the problems of capitalism, the implementation of free speech rather than truthful speech, and the church of consumerism. Curt explains why democracy doesn’t work, how there is no need for the monopoly of the production of commons, and that government should have no business in making laws. We discuss the fragileness of the infrastructure in which we live, and that it no longer takes masses in the streets to bring about revolution – just a small number of intelligent people with a plan, moral authority, and something to demand. Later, we look at shifting IQs in organizing production, along with the costs of reproduction. In conclusion, we explore solutions to the post democratic polity, where the financial monopoly is destroyed and each region of the west is free to contribute to the market based on its own cultural preferences.

New Declaration for the New Right 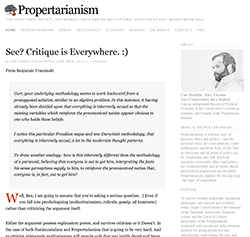