Red Shambhala: The Dark Side of Tibetan Buddhism

May 14, 2014
Andrei Znamenski studied history and anthropology both in Russia and the United States. Formerly a resident scholar at the Library of Congress, then a foreign visiting professor at Hokkaido University, Japan, he has taught at The University of Memphis and Alabama State University. His fields of interest include religions of indigenous people of Siberia and North America, shamanism, and esotericism. Znamenski is the author of Shamanism and Christianity (1999), Through Orthodox Eyes (2003), Shamanism in Siberia (2003), The Beauty of the Primitive: Shamanism and Western Imagination (2007), and the editor of the three-volume anthology Shamanism: Critical Concepts (2004). We’ll discuss the dark side of Tibetan Buddhism and what lies behind this seemingly peaceful religion. Andrei discusses how Tibetan Buddhism became embraced by the west, specifically by leftists. He’ll talk about how this eastern religion has been slyly integrated into politics to push ulterior motives by people such as the Dalai Lama, Karl Marx and the Bolsheviks and Stalin yet these themes continue today. We’ll hear about how the west and the east exploited Shambhala to promote their fanatical schemes. In the second hour, Andrei explores the reason why Henry Wallace supported a "botanical expedition" (1934-1935) to Eastern China. To the surprise of his colleagues in the Department of Agriculture, Wallace appointed as the head of this expedition, Russian painter and occultist Nicholas Roerich. Roerich used this as an opportunity to jump-start his utopian geopolitical project of the Sacred Union of the East - an attempt to bring all Tibetan Buddhist people of Inner Asia into a vast theocratic state that would become a spiritual beacon for all of humanity. Later, we discuss Wallace’s idea to put the pyramid and eye on the dollar bill and the phrase Novus ordo seclorum. This New World Order is married to an ideology of new age collectivism. 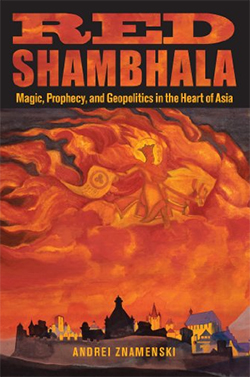