Guillaume Durocher is a French political writer and historian. He has lived in many European countries and worked in politics and journalism. He writes for several Alt-Right publications, including The Occidental Observer, Counter-Currents, and Radix.

We begin by discussing the results of the recent election. Guillaume compares Trump’s victory to Brexit, for the mainstream media – through its polls and pundits – failed to accurately predict either. We discuss what this means for not only America, but the West as a whole. Guillaume explains that the American nation-state is now run by a wildcard, and that if Trump drastically alters the course of America, Europe will follow suit. We then discuss Guillaume’s background, including how he became a nationalist. We learn that he was originally an anti-war liberal; questioning the EU, however, led him to then realize the importance of having homogeneous nation-states. The first hour also explores the ongoing culture war in the West, the Jewish community’s response to the Trump phenomenon, and the origins of our current plight.

The members’ hour begins with a consideration of technology. We discuss how the internet has allowed for alternative media to loosen the mainstream media’s control over culture and information. Guillaume correctly points out that Trump, through his condemnation of the mainstream media, has furthered this effect. We then switch gears to consider the big picture. Guillaume argues that it’s okay for those of us in the Alt-Right to disagree about the ideal form of government; what matters, though, is that whichever system we adopt exist solely for the benefit of our people. Guillaume then makes a case for the inclusion of genetics into policymaking decisions, which leads to a discussion on the massive population boom now underway in the third world. The members’ hour also covers the need for willpower and determination, the vulgarization of Western culture, and the tribal nature of fascism. 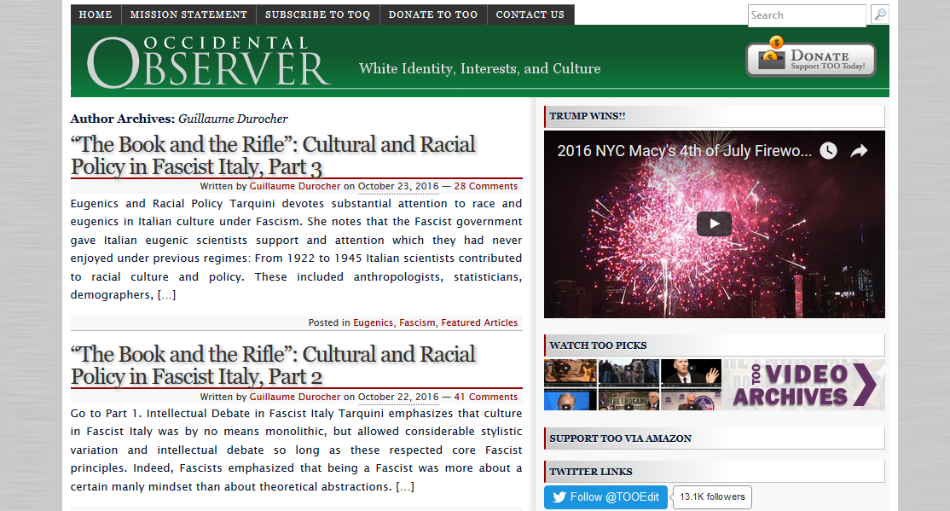