Jun 7, 2012
Brit is particularly interested in global terrorism, real and contrived, the manipulations and subversive agendas of the political and financial elite, and propaganda of the mainstream media. Tom Secker is a British based writer, researcher and filmmaker who specializes in terrorism, the security services and declassified history. He has been writing on the philosophy and politics of fear since 2008. Brit Dee is a writer, researcher and broadcaster. His journalism is regularly published on many alternative media sites. Tom and Brit will discuss the Anders Breivik trial, points of interest in the case, interesting connections, suspicious aspects and the strategy of tension. We'll talk about how this terrorist event may be used to further the globalist's agenda. In the second hour, we begin discussing how Anders Breivik was put on the Norwegian intelligence watch list after buying chemicals online. We discuss security at the price of no privacy. Then, we talk about Anders' manifesto, his declarations and his sanity. Dee and Secker bring up his fascination and study of the Al-Qaida. We explore the possibility of Breivik as a mind controlled patsy. Later, we mention oddities surrounding this case, including witness reports of hearing foreign voices on Utoeya island during the shooting and about Breivik's mother. Also we discuss multiculturalism as a failed experiment and the possible political and social outcomes because of this case. 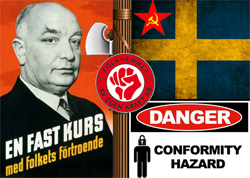