The Coming of a New Ice Age

Feb 3, 2014
Robert Felix, a former architect, became interested in the ice-age cycle back in 1991. He spent the next eight and a half years, full-time, researching and writing about the coming ice age. Since then he has been dedicated to speaking about this research. Robert is the author of Not by Fire But By Ice and Magnetic Reversals and Evolutionary Leaps. In the first hour, we discuss solar cycles and how they coordinate with ice ages and collapses of civilizations. Felix explains why he is convinced that the next ice age has already begun. Now even mainstream scientists are warning that the sun has "gone to sleep." We'll discuss the last Maunder Minimum in the 1600's, which was responsible for the Little Ice Age and lasted for 70 years. We are at a real risk of seeing a return of such conditions. Robert explains what an ice age would entail. In the second hour, we talk about the increasing propane and electricity prices as we are experiencing the lowest temperatures since 1918. Then, we'll discuss magnetic pole reversals that match up with ice age cycles. Robert shares his theory on how evolutionary leaps can take place during a magnetic reversal. He presents an explanation for certain mysteries surrounding extinction events and the appearances of new species. Later, we hear about the 500 year orbital stretch cycle also due at this time. At the end, Robert talks about how ice ages come on suddenly and he mentions what to look out for.

Not by Fire but by Ice: Discover What Killed the Dinosaurs...and Why It Could Soon Kill Us
Magnetic Reversals and Evolutionary Leaps: The True Origin of Species 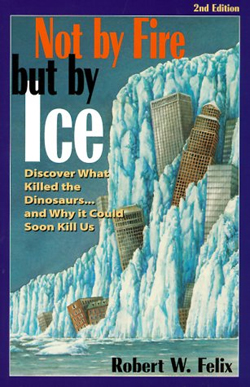