The Creation of Israel & The ISIS Conspiracy

Apr 17, 2015
Brandon Martinez is an independent writer and journalist from Canada who specializes in foreign policy issues, international affairs and 20th and 21st century history. For years he has written on Zionism, Israel-Palestine, American and Canadian foreign policy, war, terrorism and deception in media and politics. He is the author of Grand Deceptions, Hidden History and The ISIS Conspiracy. Brandon is with us to give his take on the ISIS conspiracy and the array of terrorism plots that have been used to manipulate the masses and shape foreign policy. We begin with a look at the state of mainstream journalism today and the opinions of popular culture that are defined by reporting that sticks to largely unchallenged official narratives. We consider how the powers that be are able to maintain protected status and convince society to relinquish freedoms via manipulating language and demonizing criticism of authority. Brandon takes us through the history of recent wars that have been predicated on fabricated terrorist attacks, and he outlines the backdrop of lies and guilt on which the state of Israel has been built. Martinez details the fine points in the hidden story behind the World Wars, and explains how Hitler and Germany was pushed and consequently used in order to justify the creation of Israel. In the second segment, we move forward to the history and origins of Al Qaeda, with a ‘terrorist’ agenda contrived by the CIA, backed up by the Saudi Wahhabi regime and brought to fruition through Pentagon propaganda. Brandon expounds how the US has managed to justify continued occupation in Iraq while instigating a major regime change in Libya, leading to conflict in the Muslim world and eventually giving birth to the ISIS movement. Further, he gets into the Globalist-Zionist destabilization agenda that has been exported to the Middle East and northern Africa, designed to divide and conquer countries that refute western imperialism. We chew over the many indications that ISIS is a proxy force acting out a series of fabricated ‘terror events’ staged for the purpose of implementing an Orwellian police state across Western countries. Our discussion ends with some thoughts on the major contradictions in government that are casting light on the illegitimacy of democracy and the psychopathic power elite, setting the stage for a major paradigm shift in the ruling structure of our world.

nonalignedmedia.com
martinezperspective.com
Winter War
The Nuremberg Trials and the Holocaust pt 1
The Nuremberg Trials and the Holocaust pt 2
Wesley Kanne Clark (1944–)
General Clark reveals that Daesh is an Israeli project
A Clean Break: A New Strategy for Securing the Realm
The Zionist Plan for the Middle East
Lessons from Kosovo for NATO and the West
Europe’s Leading Rabbi: Jews Must Begin Carrying Guns
Marine Le Pen in political attack on her father after he belittles Holocaust

The ISIS Conspiracy: How Israel and the West Manipulate Our Minds Through Fear
Hidden History: Essays and articles about war, terrorism and deception in media and politics
Grand Deceptions: Zionist Intrigue in the 20th and 21st Centuries 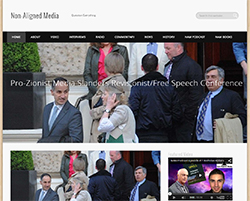