Aug 29, 2014
Patrick Henningsen is an independent journalist and founder of 21st Century Wire, an independent media voice for geopolitical news and analysis. Patrick returns to discuss the ISIS crisis. He’ll talk about who is funding the crisis and how recruitment is done. Does ISIS pose a threat? Patrick explains how ISIS did not come from Syria. We’ll also discuss what Israel wants out of the Syrian situation. Later, we’ll speak about the beheading of James Foley and how social media is being used as a pretext to go to war. In the second hour, we’ll discuss Israel, the Hamas and the aggression against Palestine. Then, we’ll talk about events between Russia and the Ukraine. Patrick explains the agenda of removing Russia from the international scene with the main goal to isolate Russia, an ally of Syria, culturally and financially. Since Russia cannot be folded into the European Union, they must be broken down. We’ll talk about how Russia fits into NATO’s long term plan. Meanwhile, as Russia encourages making babies, the authorities in Rotherham England turn a blind eye to the sexual abuse of 1400 English children, who were exploited by Pakistani gangs of pedophiles, in fear of being labeled racist. We’ll end the hour discussing how insane political correctness can get. 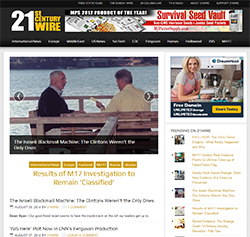