The Destruction of Western Culture

Jun 12, 2015
Jonas De Geer was born in Stockholm, Sweden in 1971. He's a writer, publisher, radio-personality and an activist. He has been a leading personality in the opposition in Sweden since the 90’s. Jonas is with us to help make some sense of what is happening with mass immigration to Northern Europe and the US and the policies that keep these throngs of people pouring over the borders. We discuss the unique altruistic attitudes based in freedom and democracy that are prevalent in these mainly White, Christian countries, and we question what has been reshaping public opinion about many hotly debated subjects such as gay marriage, divorce, the right to question history, and more. We point to evidence of a mainstream media agenda that is directing Western society to believe there is something wrong with wanting what is best for its own people, while an elite power structure benefits from the slow, steady erosion of American and European homelands and culture. In the second half, we look deeper into the issue of burgeoning immigrant populations in the west, where native peoples are steadily becoming minorities in their own lands and resources are quickly drying up while billions of dollars in aid are funneled to 3rd world countries. We also consider the one-dimensional qualities and controlled distribution of media coverage surrounding some of the most pressing issues facing Sweden. Further, we probe into some of the disturbing, imported problems that mass immigration creates, the bulk of which are being overlooked by the pathological mentality that resides within Sweden. At the end, we pick over the political arena in Sweden, where parties like the Swedish Democrats are revising their rules of inclusion and the controlled opposition helps to define the implementation of increasingly insane policies. 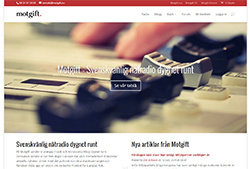