Apr 20, 2015
Mike Campbell spent nine years as an active-duty Navy print and broadcast journalist and 21 years as a Navy civilian writer and Air Force public affairs officer. He is the author of With Our Own Eyes: Eyewitnesses to the Final Days of Amelia Earhart, and his second book on the Earhart case, Amelia Earhart: The Truth at Last, greatly expands upon the important eyewitness accounts of former American GIs who participated in the 1944 Battle of Saipan. Mike begins by explaining how he was assigned to write an article on America’s “First Lady of Flight” in 1988 and subsequently met author Thomas E. Devine during his research, who proclaimed the presence and death of Amelia Earhart and her copilot Fred Noonan on the island of Saipan after their disappearance in July 1937. Mike gives us the two versions of the story behind the vanishing of the most famous woman in the world at this time in history and highlights the sheer magnitude of the lie that has been perpetuated into present day. He talks about Earhart’s bizarre radio behavior on the day of her world famous attempt to circumnavigate the globe, the accounts of a controlled crash-landing of Earhart’s Electra NR16020 in the water off the coast of Mili Atoll seen and corroborated by many natives, and reports of an execution by the Japanese military officials. We look at the climate of the relationship between the US and Japan during this timeframe, and consider the suggestions that Earhart and Noonan were acting as spies. Mike talks about the astronomically expensive search that was conducted by the US Navy and Coast Guard around the Marshall Islands, and new evidence that indicates the US government had already cracked the codes of Japanese intelligence and knew exactly where Earhart was. In the second half, we discuss the establishment’s complete aversion to the truth of the Earhart case, pointing to a top-down cover-up orchestrated by President Franklin D. Roosevelt and designed to protect his legacy. Further, Mike connects the dots to many officials and that were involved in the whitewashing and disposal of evidence that served to curtail a US military confrontation with Japan and further solidified the modern Democratic Party. In conclusion, Mike tells us about the forgotten research of Fred Goerner that was swept under the rug during the 1960s along with the legend of Earhart’s Electra landing that is no mystery in Marshallese culture.

Amelia Earhart: The Truth at Last
earharttruth.com
The truth in the Earhart “mystery” is a sacred cow
Smithsonian mag throws “Truth at Last” a bone: Says, “it’s possible … Campbell is on to something”
Amelia Earhart Research
TIGHAR
James Forrestal
Wallace M. Greene
Eleanor Roosevelt
The Roosevelts (film)
Do Freedom of Information Act Files Prove FDR Had Foreknowledge of Pearl Harbor?
Pearl Harbor: Hawaii Was Surprised; FDR Was Not
Robert Stinnett, Day Of Deceit: The Truth About FDR and Pearl Harbor, on the Power Hour - 1/4
Day of Deceit: The Truth About F.D.R.and Pearl Harbor
Amelia Earhart Plane Fragment Identified
The REAL Roosevelts: An Omitted History: What PBS & Ken Burns Didn't Tell You 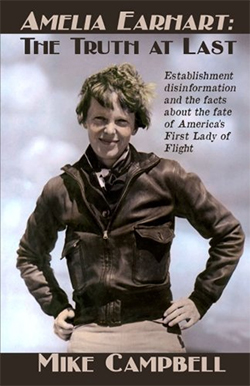