Aug 3, 2015
Veronica K. Clark specializes in World War II and military history. She earned her bachelor's degree in Liberal Studies in 2005 and her master's degree in Military History in 2009. Veronica founded Vera Icona Publishers in 2011, now called Wilk Mocy Publishers. Ms. Clark is the author of many books, and she returns to the program for a follow up on her latest volume, “The Gleiwitz Incident: Nazi False Flag or Media Hoax?” In the first segment, Veronica talks about the background of the strained relationship between Germany and Poland that began in the 1600s. She tells of the deep wounds of the German psyche that were inflicted from years of conflict over lands and money that set the stage for animosity towards the Poles. She explains the incident at Gleiwitz where, according to the official narrative, the Nazis posing as Poles staged an attack near Germany’s border, which ended up being the pretext for launching off the murderous abomination of WWII. We also talk about Britain’s meddling and sabotaging in the north that made it impossible for the region to be at peace. In the members’ segment, Veronica discusses the reasoning behind Adolf Hitler’s invasion of Poland. She says that he was pursuing an alliance with Poland, but that he did have an imperial intent for unifying Northern Europe in the spirit of authoritarian Germanic rulership in order to create a powerful front against Russia. Veronica tells us about Hitler’s unique vision for the future of Europe, and his ultimate selling out of the eastern European people that was sealed when he enlisted the Nazi-Soviet pact. Then, we talk about Hitler’s views about the cultural superiority of the European race and we compare this to the concepts of American exceptionalism and “white supremacy.” Later, Veronica talks about the Zionist anti-western agenda to supplant power that is putting Confederate symbols and history under attack in America and desecrating the lifeblood of the West. We take a look at what ties the cult of Freemasonry with Judaism, along with the blatant masonic messages that are constantly intertwined within pop culture. At the end, Ms. Clark considers the genetic and biological components of strong leadership and the Nordic element of European power.

The Gleiwitz Incident: Nazi False Flag or Media Hoax? (Volume 1) (Powerwolf Publications) (Volume 6)
Churchill's Deception: The Dark Secret That Destroyed Nazi Germany
The Ideology of Fascism: The Rationale of Totalitarianism
The Man Who Started the War
Warwolves of the Iron Cross: The Union Jackal: "england's bloody path to empire and downfall"
Warwolves of the Iron Cross: Swastika and Scimitar: Brothers in Arms
Books by V. K. Clark @ Amazon 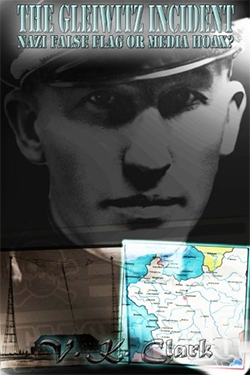