Feb 28, 2008
William F. Mann, whose late great-uncle was a Supreme Grand Master of the Knights Templar of Canada, is the author of “The Knights Templar in the New World”. He lives in Oakville, Ontario. In this program, he discusses his books "The Knights Templar in the New World: How Henry Sinclair Brought the Grail to Acadia" and "The Templar Meridians: The Secret Mapping of the New World". This is a fascinating program about Templar families, ancient secret knowledge and the Vatican. We discuss bloodlines, royals, leaders, Templar navigation and Templar meridians. We also talk about the knights of Malta, crusades, the bankers, conspiracy, the "Da Vinci Code" and symbolism of the balanced cross. For our second hour, we explore more into the topics of bloodlines, the grail, DNA research and William’s connection to the Sinclair's. We also discuss the Viking/Native American connection as well as the Vatican’s genocide of South and North American tribes. Later, we talk about the DNA research that is conducted by stclairresearch.com and what they might be looking for if they haven’t already found it. Lastly, we discuss the possible descendants of Jesus and Mary and the emerging of a new world "leader".

Knights Templar (Freemason degree) (AKA The United Religious, Military and Masonic Orders of the Temple and of St John of Jerusalem, Palestine, Rhodes and Malta)

The Sovereign Great Priory (SGP) is the governing body in Canada of the United Religious, Military and Masonic Orders of the Temple and of St. John of Jerusalem, Palestine, Rhodes and Malta

Kenneth Grant and the Merovingian Mythos

The Templar Meridians - The Secret Mapping of the New World 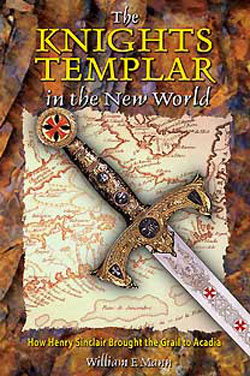