The Money Masters & The Secret of Oz

Aug 23, 2012
Bill Still is a former newspaper editor and publisher. He has written for USA Today, The Saturday Evening Post, the Los Angeles Times Syndicate, OMNI magazine, and produced the syndicated radio program, Health News. He has written 22 books and two documentary videos, including: The Money Masters and The Secret of Oz, both of which critique the United States monetary system. In our current economic crisis, what can the government do? Bill says, under the current monetary system, nothing. It’s not going to get better until the root of the problem is understood and addressed. Bill will talk about the imploding Ponzi scheme that will be felt by all nations. We’ll discuss currency, gold backing and the lender/borrower relationship. In the second hour, Bill talks about the relationship between the news and bankers. He’ll also discuss reforming the monetary system, full reserve lending and debt free money.

The Secret of Oz
No More National Debt
The Creature from Jekyll Island: A Second Look at the Federal Reserve
The Capitalist Conspiracy
The Trillion-Dollar Conspiracy: How the New World Order, Man-Made Diseases, and Zombie Banks Are Destroying America 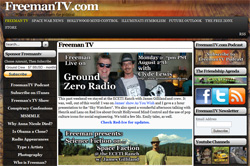