The Shoah: The Biggest Hoax of the 20th Century?

Aug 12, 2015
Eric Hunt is a filmmaker whose documentaries include “The Last Days of the Big Lie,” “The Treblinka Archaeology Hoax,” and “The Majdanek Gas Chamber Myth.” Hunt is with us to talk about the important research and work he has contributed in exposing the “greatest hoax of human history.” He has not only examined the “testimonies” and “evidence” of the so-called extermination program of the National Socialists in Germany during the 1930s/40s, but has also studied the propaganda that has been released to perpetuate this story. Eric talks about the ever-changing death toll numbers at Treblinka and Majdanek, and he points to other serious holes in the official narrative where gas chambers disguised as shower rooms are credited for the homicide of millions. We get into the specifics of disinfection facilities that were using Zyklon B to deal with the deadly typhoid epidemic that was sweeping through war-torn Europe, and evidence that suggests Treblinka, Bełżec and Sobibór were not extermination camps, but rather work camps and transfer stations created to generate manpower and deal with the disease and violence of wartime. In the members’ hour, Eric touches on the methodology of wartime propaganda and the media monopoly that has existed since pre-WWI. We explore the horrific emotional garbage that is fed through the mainstream to perpetuate rumors of human lampshades and soap, fire pits of babies, and a Hitler that wanted a world of blue-eyed and blond-haired slaves, among other ridiculous atrocities. Later, Eric details his film, “The Treblinka Archaeology Hoax,” which debunks the British Zionist archaeologist Caroline Sturdy Colls’ fraudulent “investigation” of Treblinka. We end with a look at more of the indoctrinated guilt related to past deeds of Europeans that continues to be exploited for the reinforcement of new wars waged on behalf of Israel. 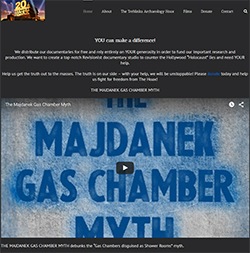