The Ten Commandments of Propaganda

May 4, 2015
Dr. Brian Anse Patrick is a professor of communication at the University of Toledo. He teaches undergraduate and graduate courses in research methods, group communication, propaganda and persuasion. He is also a nationally recognized expert on American gun culture as well as the author of many scholarly papers and five books, including The Ten Commandments of Propaganda. In this discussion, we start by looking at the definition of propaganda and where it all began. Brian explains the creation of the Committee on Public Information and its role in persuading American public opinion during World War I, an implementation that would shift other propaganda campaigns into full gear. We consider emotion as an element of propaganda, how human behavior is altered through group interaction, and the need for belonging and an explanation of a higher order that motivates people to buy into marketing schemes. Brian then takes us through the commandments of propaganda beginning with the control of the flow of information, and he uses examples from the worlds of gun culture and academia to demonstrate just how these finely honed tools have been used for the purpose of our subversion and manipulation. We speak to the censoring effects of political correctness and Brian clarifies how group pressure is used to the advantage of horizontal propaganda. In the member’s segment, Brian continues with the 5th propaganda tool, cognitive penetration, and we talk about how this method for cutting through information overload is dumbing down the masses. Further, we examine how socialization propaganda is erasing the meaning of our history while destroying creativity and individualism. Then, we get into reverse psychology and the sneaky methods used by NGOs to sway public opinion. We consider how propaganda often appeals to our weakest natures and persuades us to indulge the ego, replacing religion and dogma with the media-based judgements. Our discussion ends with an analysis of the ahistorical standpoint of modern high schools and universities and how socialist movements are being used to control the narrative both now and for the future.

Rise of the Anti-Media
arktos.com
Propaganda
Examples of censorship and propaganda in Wikipedia
Edith Cavell
Frank Capra
Mindy Kaling's Brother Admits He Pretended To Be Black So He Could Get Into Medical School
Voluntary association
Masters of propaganda
Propaganda Due 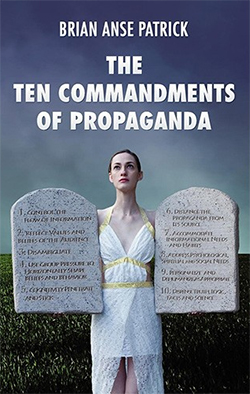