Jan 22, 2016
Dr. Brian Anse Patrick is a professor of communication at the University of Toledo. He teaches undergraduate and graduate courses in research methods, group communication, propaganda and persuasion. He is also a nationally recognized expert on American gun culture as well as the author of many scholarly papers and books, including “The Ten Commandments of Propaganda,” “Zombology: Zombies and the Decline of the West (and Guns)” and his forthcoming release, “PropaGUNda: The Informational War over Guns.”

In the first hour, Brian talks about the rise of the zombie phenomenon, which he calls the premier archetype of modern times. We compare the original, minion-like, brain-eating zombie under the control of evil forces with the modern day, mass society version of autonomy – braindead cogs plugged into a constant stream of entertainment and self-affirming social media. Brian relates this trend to the UFO craze - a visionary rumor that bloomed out of the high-anxiety climate of the nuclear age and the Cold War. He says the zombie trend is a signal of cultural decline and a general breakdown of civil society, and it has that ultimate death head symbol appeal. We look at Hollywood depictions of the Zombie archetype and the common theme of a few armed individuals responding to uncontrolled outbreaks of the living dead. Brian illustrates how the zombie outlet serves a function as a projection of what is forbidden to be feared and hated about society. Further, we connect the government’s subsidization of low-level behaviors to a general decline in intelligence and the looming collapse of Western culture.

In the members’ hour, we get into the spike in gun sales in Europe that resulted from the Cologne sex attacks, and we consider what’s causing the surge of women entering gun culture in America. Brian describes the steps to selecting an appropriate weapon and getting the proper training, he defines the laws of self-defense, and highlights potential repercussions for exercising 2nd Amendment rights. We also talk about the deeply traditional and ceremonial significance of hunting and Brian gives recommendations for efficient rifles. Later, Brian discusses common idiosyncrasies of many university professors – our chief administrators of cultural Marxist ideologies – who are leading the way towards the internal colonization of citizens. As we round things off, Brian touches on Donald Trump’s very Aristotle-like qualities, his decidedly old and wrinkled competition, and the psychopathic penchants of past presidents.

The Ten Commandments of Propaganda 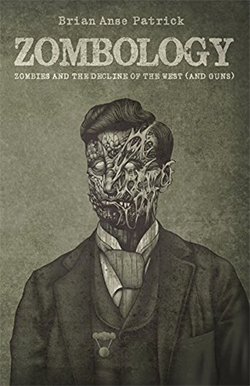