The Ukraine in Turmoil

Israel Shamir is an internationally acclaimed radical spiritual and political thinker, internet columnist and writer. His comments about current affairs and their deeper meaning are published on his site israelshamir.net and elsewhere. He is also author of three books, Galilee Flowers, Cabbala of Power and recently published Masters of Discourse, available in many languages. A native of Novosibirsk, Siberia, he moved to Israel in 1969, served as paratrooper in the army and fought in the 1973 war. After the war, he turned to journalism and writing. In 1975, Shamir joined the BBC and moved to London. After returning to Israel in 1980, Shamir wrote for the Israeli daily newspaper Haaretz, and was the Knesset spokesman for the Israel Socialist Party (Mapam). He translated and annotated the cryptic works of S.Y. Agnon, the only Hebrew Nobel Prize winning writer, from the original Hebrew into Russian. Shamir’s main topic of focus is on the question of Israel/Palestine relations. Shamir lives in Jaffa and spends much time in Moscow and Stockholm. In this program, we discuss the turmoil in the Ukraine. We’ll talk about the history behind the struggle for the Ukraine, the Orange Revolution and the oligarchs behind it. Israel also discusses the old Soviet empire in relation to the Ukraine. Later, we deconstruct those who seek to dominate Ukraine from behind the scenes. Also, we’ll talk about the relations between the west and Putin’s Russia and the strange relationship between neo-Nazis and nationalists who work with globalists and Zionists to take control of the Ukraine. The hour ends on the future of Europe and what kind of conditions the planned chaotic conflicts will bring.

israelshamir.net
The Ukraine in Turmoil
Harvest of Despair - The Forgotten Genocide of Ukrainians by Communists in 1933
Understanding the Crisis in Ukraine
Russia takes over Ukraine’s Crimea region - Western Medias Anti Russian Blitz Continues 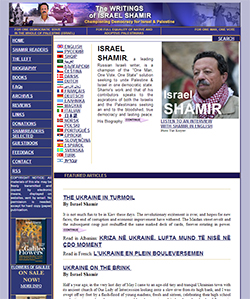