The Western Tradition, Art Activism & The Pursuit of The Real

Tough Love is an artist and blogger from New Zealand who writes from a Eurocentric perspective on his blog ToughLoveLetters. He makes regular solo exhibitions of paintings that deal with Abstract Language and the history of Western Painting. Tough Love has been making art since he was young and pursued it at a tertiary level, which led to technical and teaching positions in the field. Recently he has turned his attention towards the notion of art activism from a New Right perspective.

Tough Love joins us for a deep deliberation on the powerful weapon of art and its potential to combat the degenerate penetration of the left dominated art sphere. He delves into his battle with the disillusionment reaped from New Zealand’s liberal education system and how he pushed on to establish a unique art process that coincided with his breakthrough into the Alt Right realm. We discuss how modern art has chewed away at the history of Western civilization’s traditional foundations, leaving behind a hollowed out version of true artistry. Tough Love describes how the advent of photography transformed classical painting techniques of creating realistic, stylized images, breaking through the boundaries of space, light and tonal modulation producible by a camera. We look at the role of industrialization and mechanization in moving painting away from representing more logical extensions of real space and time towards reductionism and the removal of traditional elements, which is mirrored in the current era’s egalitarian inclinations. Further, Tough Love relates how modern artists like Pollock, Picasso and Warhol influenced the collapsing of boundaries between art and life by bringing the forces of the physical universe into dictating the art form.

In the members’ hour, Tough Love gets into using the mechanism of art to confront the system that has attacked tradition and remedying our post-modern amnesia for the veritable language of art. He says that the best works of art are ones that can naturally link back into their history, offering a visual dialogue that goes beyond just the critique of culture. We discuss the iconic Warhol prints and their representation of the mass production process that defined a new ability of making art out of any image. Then, Tough Love goes on to define the high stakes of making art that emulates the classic masters, as well as what it takes to seize the attention of a viewer to create a jarring experience, and he addresses the challenging aspects of revitalizing great Western creative traditions considering the total leftwing hijacking of the Avant guard. Later, we touch on some grotesque and bizarre things considered to be art, along with the overrepresentation of degeneracy and oppression. At the end, we look at how we can use the tools we already have in place to restore and rejuvenate the quality of contemporary art to yield sophisticated messages that pack the right punch and inspire greatness.

The Plight and Fight in Australia & New Zealand 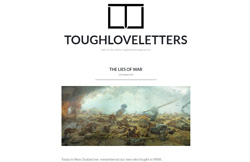