Feb 24, 2014
Daniel Estulin is an investigative journalist, researcher, author and the host of a show on RT-TV Latin America. He has given two speeches at the European Parliament on the Bilderberg Group and the international monetary crisis. He returns to discuss themes from his new book, TransEvolution: The Coming Age of Human Deconstruction. He’ll describe his vision of the future. TransEvolution asserts that the depth of progress and technological development is such that people, in the very near future, will no longer be human but something else. We’ll talk about synthetic biology, XNA molecules, genetic engineering, augmentation of reality, the transhumanist movement philosophy and more. What will become of us in the next generation? Daniel explains how “TransEvolution” and the rise of a new kind of human being fits in with the plans of the super elite. In the second hour, we’ll get into nanobots and modern warfare. Daniel says the nanotechnological revolution is about to take humans to a new dimension. He’ll also talk about food as a weapon, infertility, cradle to grave health care and the depopulation agenda. We’ll philosophize on why humankind is turning their backs on their natural selves and the natural world. What does it mean to be human?

danielestulin.com
Daniel Estulin
trineday.com
DARPA Stops Trying Not to Be Terrifying, Funds Chainsaw-Wielding, Flesh-Eating Robot
Top Transhumanism CEO Says AI Singularity Will Go ‘Very Badly For Humans’
Amped: A Sci-Fi Novel Asks Whether "Transhumans" Would Still Be Human
Get Ready for a New Human Species
Immortality only 20 years away says scientist
'We'll be able to upload our brains to a computer'
The Iron Man cometh: US Army commissions ’TALOS’ suit with liquid armor
Has mankind created a technical world that the mind cannot master or control?
This Man Is Not a Cyborg. Yet.
The DCDC Global Strategic Trends Programme 2007 - 2036 PDF
The DCDC Global Strategic Trends Programme Out to 2040 PDF
Report from the Commission to the Eeuropean Parliament, the Council, the European Economic and Social Committee and the Committee of the Regions 2007-2013 PDF 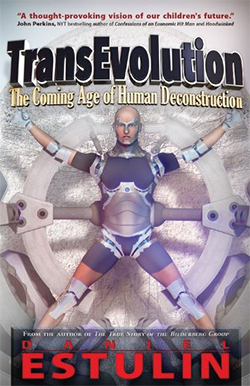