Gordon Duff is a Marine combat veteran of the Vietnam War. He is a disabled veteran and has worked on veterans and POW issues for decades. He manages the world's largest private intelligence organization and regularly consults with governments challenged by security issues. His business experience and interests are in energy and defense technology. We’ll begin discussing flight MH17 that went down in the Ukraine. Gordon explains why it couldn’t have been done by the Russians and he elaborates on what possibly happened. We also connect the missing flight MH370 and Christopher Bollyn’s discovery of a retired Malaysia Airlines plane exactly like the missing flight Mh370 in a hanger in Tel Aviv. Then, Gordon speaks about a controversial document he received, written by Sandia detailing the construction of nukes designed to take down the WTC. He’ll also talk about a “lost nuke” scenario dating back to 1991, involving Israel. Later, Gordon shares his support for Obama and claims that Obama is working to block Zionist powers. He’ll comment on Obama’s birth certificate, Obamanomics, the border crisis and much more. The second hour ends discussing political parties in the US and the Israel lobby. 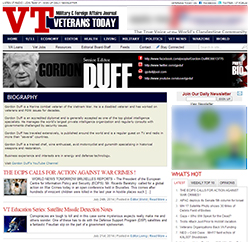