18th Century Giant Should Be Buried

Dec 23, 2011 Source: ctv.ca
The skeleton of an 18th-century celebrity nicknamed the ’Irish Giant’ should be removed from a museum and buried at sea in keeping with his last wishes, two experts have argued, reviving a debate about the ethics of handling human remains.

Writing in the British Medical Journal, medical ethicist Len Doyal and legal researcher Thomas Muinzer said there is no good scientific reason to display the skeleton of Charles Byrne, who died in 1783, and a strong moral case against it.

"What has been done cannot be undone but it can be morally rectified," the two men wrote. "Surely it is time to respect the memory and reputation of Byrne." 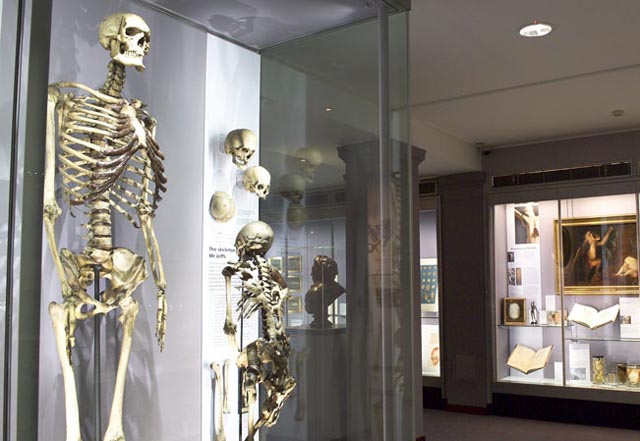 In this undated image provided by the Royal College of Surgeons, the skeleton, left, of Charles Byrne, nicknamed ’The Irish Giant,’ who stood about 7 feet, 7 inches tall, and died in 1783 aged 22, is displayed in London’s Hunterian Museum. (AP Photo/Royal College of Surgeons)
Byrne stood about 7 feet, 7 inches tall as a result of acromegaly, a condition caused when a tumor on the pituitary gland stimulates an excess of growth hormone.

He became a celebrity in 18th-century London as the star turn in a museum of curiosities but died aged just 22.

Despite Byrne’s wish to be buried at sea, his body was purchased by pioneering surgeon and anatomist John Hunter, who often hired grave robbers to supply him with corpses. For two centuries Byrne’s skeleton has been on display at the Royal College of Surgeons’ Hunterian Museum in London.

Doyal, of London’s Queen Mary University, and Muinzer, of Queen’s University Belfast, said that while Byrne’s skeleton had been of use to medical research, that was no reason to put it on public display.

"Moreover, now that Byrne’s DNA has been extracted, it can be used in further research," they wrote.

The museum’s director, Sam Alberti, conceded Thursday there was a "powerful moral argument" for respecting Byrne’s wishes. But he said that was outweighed by the skeleton’s continuing benefit to medical research.

"Patients with the condition today live long and much happier lives," Alberti said - in part due to knowledge gleaned from Byrne’s DNA.

Byrne’s skeleton has helped scientists identify several dozen people in Ireland with the same genetic mutation - all believed to be related to Byrne through a common ancestor.

One of them, Brendan Holland, says the skeleton should remain -- and he thinks Byrne would agree.

"What would his view be if he knew what we know now?" Holland said in a video for the British Medical Journal website. "He would almost certainly agree with my view that this is the right thing to do today."

He soon became the toast of the town; a 6 May 1782 newspaper report bears out: "However striking a curiosity may be, there is generally some difficulty in engaging the attention of the public; but even this was not the case with the modern living Colossus, or wonderful Irish Giant."

Fame and wealth soon overtook Byrne, and he took to drinking excessively. According to newspaper reports he was out drinking when his pocket was picked of his 700-pound life savings. Inconsolable, he tried to drown his sorrows in drink and died in June 1783, in his apartment on Cockspurstreet, Charing Cross, at the age of twenty-two.

It was rumoured that he was so afraid that doctors would dissect his corpse that on his deathbed he requested to be buried at sea. Against his wishes, Byrne’s corpse was purchased by John Hunter for five hundred pounds (2011: £50,000) , and his 2.31-m (7 ft 7 in) skeleton now resides in the Hunterian Museum at the Royal College of Surgeons in London.

One journal allegedly states that on his death, "The whole tribe of surgeons put in a claim for the poor departed Irishman and surrounded his house just as harpooners would an enormous whale."
Source: Wikipedia 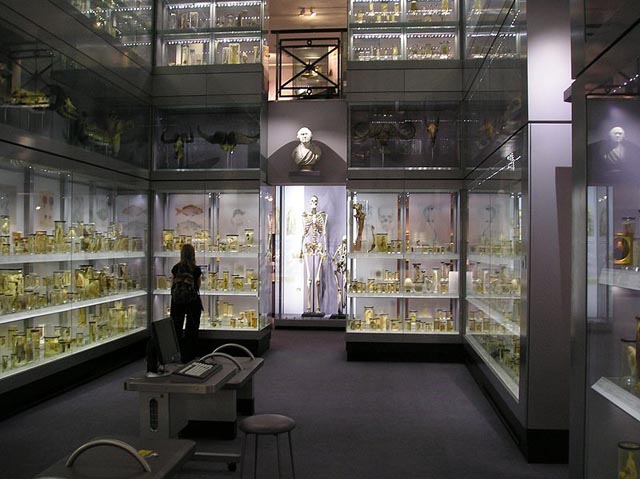 The skeleton of the seven and a half foot (231cm) tall "Irish Giant" is visible in the middle of this image. (Wikipedia)