May 3, 2013 Source: theatlantic.com
This clan has traveled from Russia through China, Brazil, and Oregon to make a home in the remote north, struggling to avoid modernization. 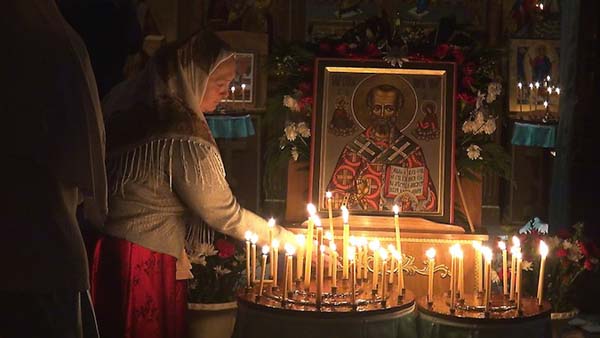 Father Nikolai says that candles represent a little sacrifice. They cost the members of the congregation a dollar, which goes to the upkeep of the church.
On a Sunday afternoon, in the middle of a cold winter, members of Father Nikolai’s congregation and family gather in his living room for fish pie, salted salmon, and shots of Jose Cuervo 1800. But before sitting down to eat they stand up as a group to face an icon corner adorned with gold laden paintings of patron saints, candles, and old Russian jewelry. They pray in unison, singing an ancient Slavonic chant, before falling silent and crossing themselves, bowing twelve times.

The Yakunin clan was much smaller in 1968 when they started building a Russian Orthodox village called Nikolaevsk in an isolated corner of Alaska’s Kenai Peninsula. Members of the Old Believers--a Russian Orthodox sect that left the church in 1666, in the face of state-issued church reforms--traveled more than 20,000 miles over five centuries in the search for the perfect place to protect their traditions from outside influences.

The women wear teal, pink, red, and purple satin dresses, all made with the same basic design that covers their bodies down to their ankles. Married women cover their hair with scarves that match their colorful gowns. Father Nikolai has a full red beard that reaches the top of his round belly and his hair is in a ponytail that runs down his back over a traditional Russian shirt.

A thick-cheeked baby dozes off in a rocker next to Father Nikolai’s son, Vasily Yakunin, who most people think will become the next priest in the community. Nikolaevsk instated their first priest in 1983 after centuries of living without clergy, which created a rift that divides the community to this day.

Vasily slouches in a leather chair, playing a space shooting videogame on his iPad, while the rest of the guests crowd around the lunch table, laughing and passing around a plate of jam-filled pastries for dessert. The only person over twenty-one who is exempt from the occasional shots of tequila is Efrosinia Yakunin, who is four months pregnant with Father Yakunin’s fifteenth grandchild.

"If we stopped believing and stopped going to church and observing the orthodox way of life," Father Nikolai says, "we would cease to exist."

On a journey back through time that touches some of the most remote corners of the globe--a generation ago, Oregon, before that Brazil, China, and Siberia--the Yakunin clan emerges out of history as a family in search of a way to live without compromise. But even at the end of the world it’s impossible to resist change forever.

Before starting on this 20,000-mile hopscotch across the globe, the Old Believers lived peacefully in a remote part of Siberia for nearly 200 years. The turmoil started around 1666, when Patriarch Nikon, the head of the church, altered the Russian Orthodox prayer books and traditions. "What happened was it was forced on people, you know, people were forced to accept it," Father Nikolai says. "And if, there should be no questions at all. If anybody brought up a question, he was beat. His fingers were cut off or something like that, tongues cut out."

The changes that Patriarch Nikon introduced--like the spelling of Jesus’ name in the prayer books and the number of fingers used to make the sign of the cross--seem trivial, but caused intense turmoil. "For us moderns, it’s hard to understand," says Jack Kollman, professor of Russian studies at Stanford. "But it’s rather like Shakespeare, the magic is there, the purity is there. You don’t change a poem into prose without losing the magic of it. And for a Russian Orthodox peasant...the way you make the sign of the cross...as far as anyone knew was the way that God taught them to do it. And [their] father and grandfather and ancestors got to heaven because they practiced the faith as we were taught it," he explains. "You don’t rephrase Shakespeare."

Read the full article at: theatlantic.com