A look at Mexico’s Immigration Laws - Who Knew?

Aug 10, 2014 Source: humanevents.com
What the west could learn from Mexico’s Immigration law:

Foreigners may be barred from the country if their presence upsets “the equilibrium of the national demographics,” when foreigners are deemed detrimental to “economic or national interests….”

This only applies one way ..naturally! From here to there ... but not from there to here. 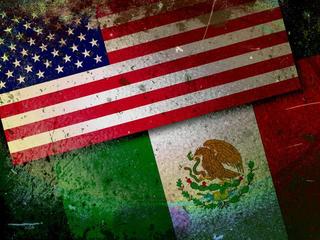 Mexico has a radical idea for a rational immigration policy that most Americans would love. However, Mexican officials haven’t been sharing that idea with us as they press for our Congress to adopt the McCain-Kennedy immigration reform bill.

That’s too bad, because Mexico, which annually deports more illegal aliens than the United States does, has much to teach us about how it handles the immigration issue. Under Mexican law, it is a felony to be an illegal alien in Mexico.

At a time when the Supreme Court and many politicians seek to bring American law in line with foreign legal norms, it’s noteworthy that nobody has argued that the U.S. look at how Mexico deals with immigration and what it might teach us about how best to solve
our illegal immigration problem. Mexico has a single, streamlined law that ensures that foreign visitors and immigrants are:

* in the country legally;

* have the means to sustain themselves economically;

* not destined to be burdens on society;

* of economic and social benefit to society;

* of good character and have no criminal records; and

* contributors to the general well-being of the nation.

The law also ensures that:

* immigration authorities have a record of each foreign visitor;

* foreign visitors do not violate their visa status;

* foreign visitors are banned from interfering in the country’s internal politics;

* foreign visitors who enter under false pretenses are imprisoned or deported;

* foreign visitors violating the terms of their entry are imprisoned or deported;

* those who aid in illegal immigration will be sent to prison.

Who could disagree with such a law? It makes perfect sense. The Mexican constitution strictly defines the rights of citizens — and the denial of many fundamental rights to non-citizens, illegal and illegal. Under the constitution, the Ley General de Población, or
General Law on Population, spells out specifically the country’s immigration policy.

It is an interesting law — and one that should cause us all to ask, Why is our great southern neighbor pushing us to water down our own immigration laws and policies, when its own immigration restrictions are the toughest on the continent? If a felony is a crime punishable by more than one year in prison, then Mexican law makes it a felony to be an illegal alien in Mexico.

If the United States adopted such statutes, Mexico no doubt would denounce it as a manifestation of American racism and bigotry.

We looked at the immigration provisions of the Mexican constitution. [1] Now let’s look at Mexico’s main immigration law.

Mexico welcomes only foreigners who will be useful to Mexican society:

* Foreigners are admitted into Mexico “according to their possibilities of contributing to national progress.” (Article 32)

* Immigration officials must “ensure” that “immigrants will be useful elements for the country and that they have the necessary funds for their sustenance” and for their dependents. (Article 34)

* Foreigners may be barred from the country if their presence upsets “the equilibrium of the national demographics,” when foreigners are deemed detrimental to “economic or national interests,” when they do not behave like good citizens in their own country, when they have broken Mexican laws, and when “they are not found to be physically or mentally healthy.” (Article 37)

* The Secretary of Governance may “suspend or prohibit the admission of foreigners when he determines it to be in the national interest.” (Article 38)

Mexican authorities must keep track of every single person in the country:

* Federal, local and municipal police must cooperate with federal immigration authorities upon request, i.e., to assist in the arrests of illegal immigrants. (Article 73)

* A National Population Registry keeps track of “every single individual who comprises the population of the country,” and verifies each individual’s identity. (Articles 85 and 86)

* A national Catalog of Foreigners tracks foreign tourists and immigrants (Article 87), and assigns each individual with a unique tracking number (Article 91).

* Foreigners with fake papers, or who enter the country under false pretenses, may be imprisoned:

* Foreigners with fake immigration papers may be fined or imprisoned. (Article 116)

* Foreigners who sign government documents “with a signature that is false or different from that which he normally uses” are subject to fine and imprisonment. (Article 116)

Foreigners who fail to obey the rules will be fined, deported, and/or imprisoned as felons:

* Foreigners who fail to obey a deportation order are to be punished. (Article 117)

* Foreigners who are deported from Mexico and attempt to re-enter the country without authorization can be imprisoned for up to 10 years. (Article 118)

Under Mexican law, illegal immigration is a felony. The General Law on Population says,

* “A penalty of up to two years in prison and a fine of three hundred to five thousand pesos will be imposed on the foreigner who enters the country illegally.” (Article 123)

* Foreigners with legal immigration problems may be deported from Mexico instead of being imprisoned. (Article 125)

* Foreigners who “attempt against national sovereignty or security” will be deported. (Article 126)

Mexicans who help illegal aliens enter the country are themselves considered criminals under the law:

* A Mexican who marries a foreigner with the sole objective of helping the foreigner live in the country is subject to up to five years in prison. (Article 127)

* Shipping and airline companies that bring undocumented foreigners into Mexico will be fined. (Article 132)