A Memorial for the Victims of the Wilhelm Gustloff sinking, Jan. 30th, 1945 – A “hate crime” of epic proportions

In the night of January 30th, 1945 while evacuating refugees from Eastern Germany, the Gustloff, which was designed to carry a max. 1,865 passengers, had 10,582 on board when she was torpedoed by Soviet sub S-13. An estimated 9,343 Germans, mainly civilians, including men, women, elderly, sick and wounded, and about 5,000 children, perished in the frigid Baltic Sea waters, making it the largest loss of life in a single ship sinking
in maritime history.

This was an ALLIED WAR CRIME, a HATE CRIME, and a CRIME AGAINST HUMANITY!

The sinking of MV Wilhelm Gustloff was a “war crime” and indeed a “hate crime” of epic proportions, which the world media, court historians and justice officials have ignored, like so many others committed against Germans. Why? Because of blatant Anti-German propaganda. “German victims” does not fit with the standard narrative of the so-called “good war” and with the childish notion that most have been indoctrinated with of “good guys vs bad guys”. If at all mentioned or noticed, the information is quickly dismissed and forgotten as the years of mental programming overrides ones logic, human decency and compassion with a simplistic response “They were Germans. Who cares? They started the war, and whatever bad things happened to them, they had it coming!”

Thankfully, however, more and more are waking up and coming to the stark realization that they have been lied to all of their lives about virtually everything, including origins of World War II and the true agenda behind it. But for now, let’s focus on this catastrophe and the events which led up to it.

History’s Greatest Naval Disasters – The Little-Known Stories of the Wilhelm Gustloff, the General Steuben and the Goya

(an old IHR article from 1992 citing very old sources in terms of the data which is referenced, but still a good read nonetheless)

Excerpt: “Ignorance and even suppression of the facts of these marine disasters is part of the general ignorance in the United States about the great loss of life and terrible suffering endured by the German people during the Second World War, above all in the conflict’s grim final months. For the story of the unparalleled loss of life in the sinkings of these three German ships can be understood only within the context of the general situation during the final months of the war, when the advancing Soviet forces, eager to take terrible vengeance against the Germans, set in motion one of the greatest mass migrations in history.

It began in mid-October 1944, when Red Army forces first broke into German East Prussia. Spurred on by the hate filled calls to violence against Germans by Soviet Jewish propagandist Ilya Ehrenburg, Red Army troops systematically plundered and murdered Germans unfortunate enough to fall into their hands. [3]

One of the first towns taken by the Soviets was Nemmersdorf, in the Gumbinnen district of East Prussia. It was only because German forces succeeded in recapturing this town a short time later that the world was able to learn how Soviet troops had set about brutally raping females of all ages, and slaughtering the old men, women and children there. The fortunate ones were shot out of hand. Many were clubbed or hacked to death. After being raped, naked women were nailed to doors in crucifix positions. In one case, a group of refugees was crushed under Soviet tanks. [4]

German authorities lost no time in publicizing the horrifying results of the brief Soviet occupation. Journalists, including some from neutral Sweden, Switzerland and Spain, were quickly brought in to report on what had happened. Shocking newsreel footage from Nemmersdorf was shown in German motion picture theaters.

Panic-stricken civilians now desperately sought to escape falling into the hands of the advancing Soviets. As a result, during the final months of 1944 and early 1945, long columns of terrified refugees streamed into the towns and villages along the Bay of Danzig, all frantically waiting for boats that would take them to at least temporary refuge further to the west.

In light of all this, it was quickly decided in Berlin to organize a mass evacuation of civilians. As a result, between January 1945 and the capitulation on May 8, 1945, more than two million people — the great majority of them German civilians — were safely transported to the West. This second “Dunkirk,” which dwarfed many times over the British evacuation in 1940, was organized by Rear Admiral Konrad Engelhardt under the direction of Admiral Karl Dönitz, Commander-in-Chief of the German Navy.” continues here…

The Sinking of the Wilhem Gustloff

A 45 minute film produced by “Unsolved History” does an excellent job of investigating all of the facts and even attended the scene where the Gustloff went down with dive crews. They then engaged maritime disaster experts who, with state of the art technology, produced computer simulations, and included eyewitness testimony from some of the still living survivors from that fateful night. They prove that the previous estimates of the lives lost were far too low, and they also validate other sources I’ve read (as shown in my graphics) that put the total number of passengers at about 10,500 and they put the death toll at around 9,600 (slightly higher than my other sources).

Furthermore, their deep sea divers discovered a hitherto unknown and very chilling fact: the Soviets later added further insult to their victims, and by extension to all Germans, by later returning to the wreck, salvaging everything of value, and then setting off explosives inside the wreck to cover up their crimes!

Sadly, yet predictably, the makers of this documentary film found it necessary to include the usual Anti-German war propaganda demonizing Goebbels for having told the truth about Soviet atrocities that had been committed at places like Nemmersdorf to make it seem as though these German victims of deserved the revenge that an “out of control” Germany had brought upon herself. Nothing could be further from the truth! As I have documented, Hitler did not war and he did all he could to avoid through diplomatic means. The war was ultimately forced upon us Germans, and it is high time that the full and true history be told!

The makers of this film (like most others) either portray Goebbels as a liar, or as having exaggerated the facts of the Nemmersdorf Massacre and exploiting it for political gain, when in fact, he was doing is duty and all that he could to warn his people, to save the themselves, defend themselves and their nation against the beastly Soviet Red Army / Bolshevik hordes. He was also telling the world about these war crimes! 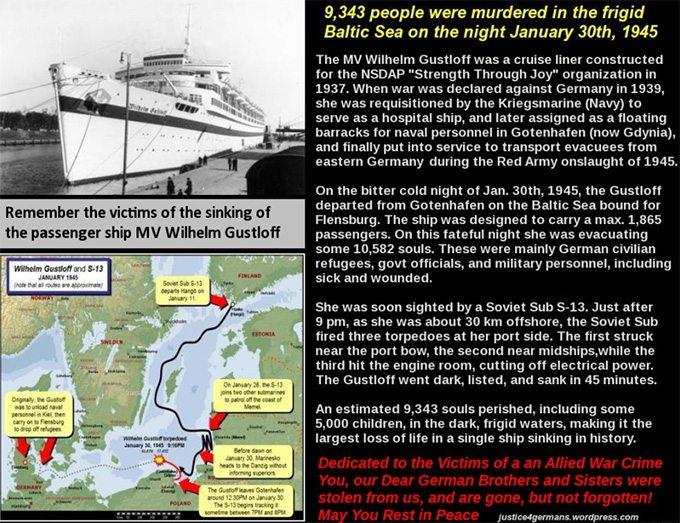 Read the rest here: A Memorial for the Victims of the Wilhelm Gustloff sinking, Jan. 30th, 1945 – A “hate crime” of epic proportions - Justice4Germans.com