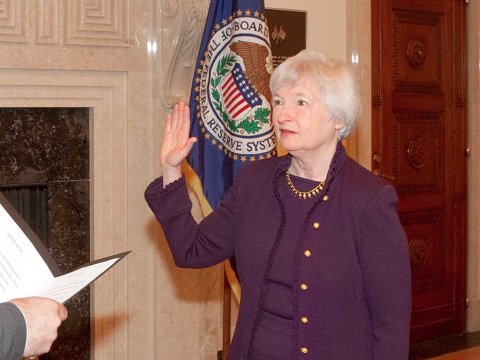 What will this mean for the average American, the middle class, and especially the poor?

In recent years, the Fed, led by chairman Ben Bernanke and since 2010 also by vice chairman Janet Yellen, has embarked on the most radical monetary experiment in US history.

Harvard economist Ken Rogoff accurately summed it up by saying: “We borrowed too much, we screwed up, so we’re going to fix it by borrowing more.”

(Ironically, Rogoff actually favored the policy; he just wanted an even more radical version of it.)

In the face of criticism, neither the Fed nor any of its allied Keynesian economists have ever bothered to explain how this approach of creating ever more new money and piling new debt on top of bad old debt can possibly work.

In the absence of a logical or factual explanation, they mostly just assume it will work, or sometimes argue that any action must be better than no action.

At her recent Senate confirmation hearings, Yellen asserted that more “stimulus” was needed because the economy and job market were “far short of their potential,” without explaining why policies that had created the crisis in the first place would help fix it.

She also offered a classic example of Fed double speak: “You know, if we want to get back to business as usual and a normal monetary policy and normal interest rates, I would say we need to do that by getting the economy back to normal.” Wasn’t that statement helpful?

Yellen also sidestepped a question from senator Heidi Hietkamp (D-ND) about why the middle class is not benefiting from her policies.

Nor did she want to discuss an observation by senator Mike Johanns ( R-Neb) that Fed stimulus is putting the economy on an unsustainable “sugar high,” or a similar reference by Senator Pat Toomey (R-PA) to the monetary “morphine drip” the Fed has been administering.

Naturally she did not choose to comment on German finance minister Wolfgang Schauble’s statement that the Fed’s second round of extraordinary new money creation after the Crash was “clueless.”

Nor did she explain why a third round, begun in July 2006, which Ben Bernanke had said would keep interest rates down, had actually resulted in higher interest rates.

Nor did she address Robert Skidelsky’s astute observation that the Fed’s “system of the past 30 years…has…benefit[ed] a predatory plutocracy that creams off the riches.”

Read the full article at: againstcronycapitalism.org
READ: Yellen: No audit of the Federal Reserve
Tune into Red Ice Radio: