A Svensson in the Swedish palace? Pass the smelling salts 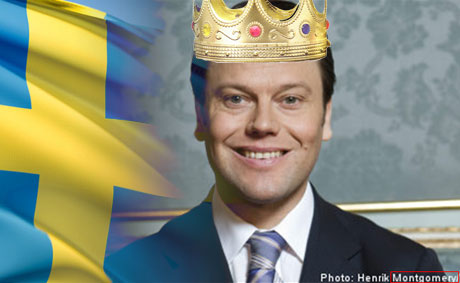 Ed Comment: Either Daniel Westling is of "royal stock" (crypto-bloodline) or he will never end up on the Swedish throne. The other alternative is that if Victoria, Crown Princess of Sweden marries Daniel she will pass on the right to the throne to her younger sister Princess Madeleine or her younger brother Prince Carl Philip. It's going to be interesting to see how they deal with this.

Furthermore, the author of the article below claims that the current Queen of Sweden Silvia Renate Sommerlathis a "commoner". Ridiculous! She is from an armed family of the German Bourgeoisie and her father Carl August Walther Sommerlath was a member of the Nazi party that fled to São Paulo in Brazil after the war. This is not a family of "commoners".

Ultimately there is no such thing as a “Swedish” Royal house anymore anyway. The current king is a mix of Saxe-Coburg and Gotha and French Bernadotte. The Swedish throne was literally given to the Frenchman Jean Baptiste Bernadotte AKA Charles XIV John by Baron Carl Otto Mörner in 1810 under the approval of Napoleon I.

The engagement of Crown Princess Victoria and Daniel Westling has underlined, rather surprisingly, that Sweden is still a society that divides along class lines.

A royal wedding is the perfect chance, you would think, for royalists to drag out the bunting and warm up for a bit of patriotic ceremonial. But the idea of the princess marrying a middle-class gym owner from northern Sweden has had both über-conservative royalists and metropolitan liberals reaching for the smelling salts.

Dick Erixon, a leading centre-right commentator, argued on his blog that "for a Svensson family to sit on the throne breaks the principles of the monarchy." He declared that the princess’s decision to marry a man of the people had put him off the royals.

This is an argument articulated surprisingly often in modern Sweden. Presumably Erixon thinks Victoria should enter into an arranged match with some rubicund German princeling with an oversized adam's apple.

Erixon seems to forget that Sweden's royal family has always admitted commoners – including the current queen. Was Victoria trying to remind us of this by giving her post-engagement audience under a portrait of Jean-Baptise Bernadotte, the founder of the current dynasty and a provincial lawyer's son from France?

But Erixon’s problem with Westling is that he is one of that dreaded breed - a Svensson. With a foreigner you can ignore a regional accent; with a Swede, the ordinariness (shudder) is more apparent.

Erixon’s view, while by no means unique, is perhaps somewhat eccentric. But he wasn’t the only one having a dig at the royal engagement.

Indeed, the most common reaction from newspaper leading articles was one of opportunistic snarkiness: ‘a step towards a republic’, said Dagens Nyheter, with more than a touch of wishful thinking. Aftonbladet’s leader pages also managed to craft a call for a republic from the news of the engagement. Sydsvenskan, Skånska Dagbladet and Uppsala Nya Tidning made similar noises.

A majority in the Riksdag would agree with them, according to the most recent survey on the matter, which found that most members supported a republic.

These views are in stark contrast to those of most Swedes. The general population appears to think that Victoria’s betrothal to the future Prince Daniel is a good thing, at least if you believe the polls. They also strongly support the monarchy.

So politicians and the media are almost entirely at odds with their voters and readers. A good chunk of the Swedish political class is holding its nose as the hoi-polloi enjoys a bit of royal romance. Erixon's view might seem very different from that articulated by the media republicans, but it is founded in the same basic disdain for ordinary Swedes.

Svenssons (to use the slightly patronising term) are the backbone of Sweden – they’re the people who have built up the major Swedish industries and who man the country’s public services. They are also the people who vote in the politicians and buy the newspapers. That one of them is now joining the royal family should surely be a matter of national pride, not metropolitan disdain.

Source: A Svensson in the palace? Pass the smelling salts