A taste of the future: Double amputee controls two bionic arms at the same time

Colorado resident Les Baugh has become the newest face of bionic technology, as researchers from Johns Hopkins have fitted him with two cutting edge bionic limbs under direct control from his brain. Not only is this a major evolution for modern prosthetics, but it’s also managed to capture the imaginations of millions because it, first of all, looks really cool, and second, because it clearly illustrates the equivalence of biology and tech. The sight of the man fitted with two Modular Prosthetic Limbs (MPLs) really drives the point home: we are well on our way to the sort of bionics that powerfully challenge our concept of humanity.

Whether you want to move an arm fashioned out of stem cells or carbon fiber, you always start the same way. First comes the storm of neural activity associated with a particular action, and this pattern is recognized by a tiered network of either neurons or electrodes, then funneled off to the appropriate destination. Most amputees will need to use the electrode method, but Baugh was lucky enough to have some living nerve tissue left over in his shoulders.

Using a technique called targeted reinnervation, the researchers let his brain do the signal recognition and propagation itself, picking up the muscle orders in the shoulder, where they’ve redirected the nerves onto an unused remnant of arm muscle. The only real difference between doing this and using cranial electrodes is that Baugh’s digital hop is only shoulder-to-arm, rather than brain-to-arm, and it’s also easier to read motor signals once the body has already ferried them away from the noisy old brain.

Regardless, once a motor signal arrives in either chemical or digital form, the intention stimulates either motor proteins in muscles or electric motors in bionic limbs, and thus movement is achieved. Assuming we numbed out your real arm so you couldn’t feel any feedback, there is functionally very little difference between bionic and biological movement. The John Hopkins team has demonstrated not only how advanced their MPLs really are, but that a user can control two of them at the same time — there was never really any doubt that the technology could be twinned, but Baugh has proven that people can adapt to the challenge relatively quickly.

Of course, even Johns Hopkins’ incredible modular arms are still only just barely on their way to the final goals of bionics, as there’s a huge gap between the control fidelity we can currently get from electrodes and motors versus an evolved nervous system. Both the hardware and software side of reading neural signals, and the electrodes that provide the info and the algorithms that interpret it, must improve for that gap to close. At present, Baugh must select each specific joint he wants to move one by one, which means that to grab an object he still has to first move his shoulder to the correct angle, then the elbow, then the wrist, then the fingers. 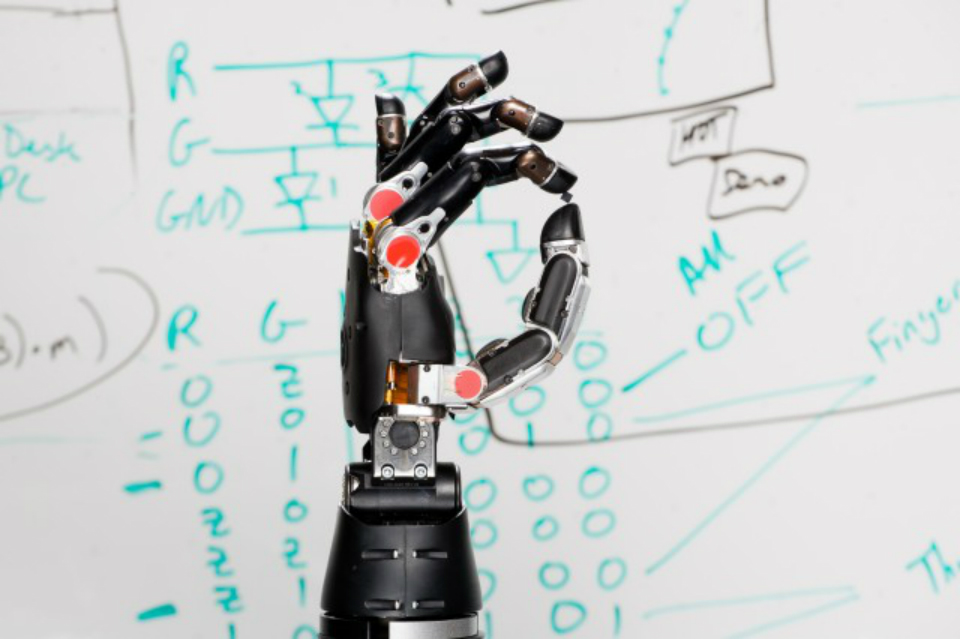 To replace the full function of a limb, you’d need to be able to control at least a dozen muscles simultaneously and independently. Scientists are pursuing that goal rabidly, already thinking about the design of next-next-generation limbs, though we’ve only just entered what could be called the plain old next generation. The John Hopkins researchers have big hopes for the future, saying that their work foreshadows a bionic arm dexterous enough to play the piano. The limbs already weigh about as much as a real arm, and the team even wants to cover it in a skin-like material so it doesn’t stick out in public. This isn’t yet planned to be the sort of sensing bionic skin currently in development at other labs around the world, but there’s no reason the two technologies couldn’t someday work together.

When you watch someone stare intently at a single bionic prosthetic limb as they slowly inch it towards a coffee mug, I think some of the impact of the awesome technology is lost — and it’s also hard to imagine living life with just a single, fairly clumsy bionic hand. But two arms, controlled in concert by a man with only modest experience using them, shows more visibly that bionic limbs can eventually be controlled a lot like the regular kind — without even really meaning to. In the video above, what’s incredible is not his success in dexterity tests, but what seem to be the occasional, primitive gesticulation in tandem with his speech. That sort of integration with thought rather than just physical intention, is the distinction between a robot helper arm and an actual limb replacement.