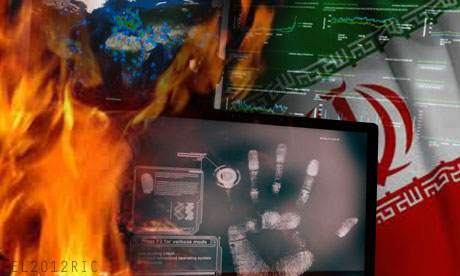 On Friday the New York Times asserted that President Obama, from his first months in office, ordered a wave of "increasingly sophisticated cyber attacks" against Iran and its nuclear program".
The program, code-named "Olympic Games", was an acceleration of Bush era attacks against Iran’s nuclear facilities.

Reportedly, Obama ramped up the attacks even after the Stuxnet worm, a computer virus directed against foreign nuclear facilities, became public knowledge due to a programming error. The Stuxnet virus jumped from computer to computer, taking out 1000 of the 5000 Iranian uranium centrifuges.
The virus eventually broke free from control and traveled around the world through the internet.

At a tense meeting in the White House Situation Room within days of the worm’s “escape,” Mr. Obama, Vice President Joseph R. Biden Jr. and the director of the Central Intelligence Agency at the time, Leon E. Panetta, considered whether America’s most ambitious attempt to slow the progress of Iran’s nuclear efforts had been fatally compromised.

“Should we shut this thing down?” Mr. Obama asked, according to members of the president’s national security team who were in the room.

Told it was unclear how much the Iranians knew about the code, and offered evidence that it was still causing havoc, Mr. Obama decided that the cyberattacks should proceed.

The US government has never admitted using so-called cyberweapons, but the Times piece suggests officials are now able to "cripple" infrastructure in a way previously only bombs and troops could achieve.

Stuxnet became public in 2010, but fast forward to today, and this week a new ’super virus’ has hit Iran and the Middle East again. This advanced virus, "can activate a computer’s audio systems to listen in on Skype calls or office chatter. It can also take screenshots, log keystrokes and — in one of its more novel functions — steal data from Bluetooth-enabled cellphones."

This powerful virus, dubbed "Flame" has already spread between nations, showing up in Saudi Arabia, Egypt, Sudan, and the West Bank.
Experts are suggesting this virus may have come from Israel, and while Israel hasn’t admitted such a role, those charges aren’t being denied by its government.

While there seems to be mainstream support for the strong-arm tactics of governments and their use of cyber weapons, it appears to be a one-way street.
Should China, Iran, or Russia be suspected of being behind a destructive virus attack on the US or its close allies, the world could expect a dramatic and disproportionate military response.

In fact, in 2011 the Pentagon "concluded that computer sabotage coming from another country can constitute an act of war, a finding that for the first time opens the door for the U.S. to respond using traditional military force."

However, because the Pentagon deems cyber attacks an act of war, how can these attacks against sovereign countries go unchallenged?

"The Rules of Armed Conflict that guide traditional wars are derived from a series of international treaties, such as the Geneva Conventions, as well as practices that the U.S. and other nations consider customary international law. But cyber warfare isn’t covered by existing treaties. So military officials say they want to seek a consensus among allies about how to proceed."

Former US President Richard Nixon famously said, "When the President does it, that means it is not illegal." It is almost certain that any attacks made by the US or its allies against sovereign nations in the form of cyber warfare will go unchecked and unpunished.

What complicates the issue further is the repeated declarations coming from experts and officials that Iran is working to further it’s nuclear technology for peaceful purposes, and does not possess the desire, or the facilities, to enrich weapons-grade uranium.

In March of this year, the west placed financial sanctions on Iran, blocking Iranian banks access to international markets. Sanctions are approved by the UN and are not illegal, but they are a move, historically, that teeters on the edge of being an all-out act of war.

This, combined with the suspicion that western governments are assassinating civilian Iranian scientists related to its nuclear program is yet another provocation in what seems to be escalating into a point of no return for both sides.

There are many downsides to playing with this type of cyber warfare fire. And they seem to all end in a world-wide military conflict. How long before Iran finally retaliates to these unsubtle acts of war against it? What will the outcome be when these super viruses are used either by hackers with malintent, or employed by governments in false-flag operations to frame domestic political activists, ’hacktivists’, or foreign nations?

At what point does the rest of the world stand up and declare these subversive engagements true ’acts of war’, and throw water on this fire before it spreads to consume us all?