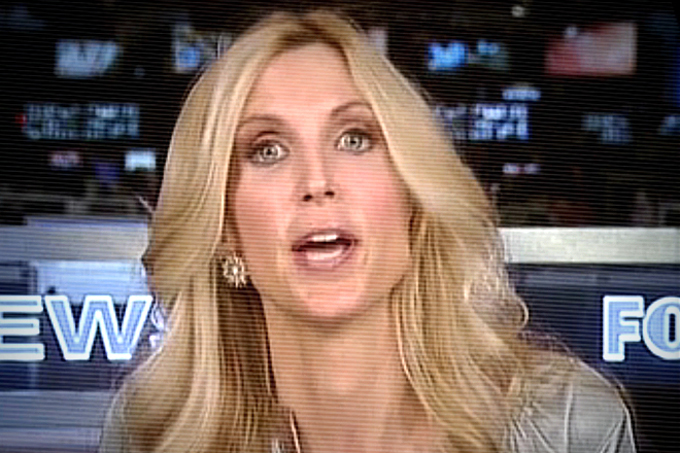 Ann Coulter is a withered old hag who uses shock value to sell books. Look at her face. What is she, 40? And her hair? Come on. Are we supposed to take this "woman" seriously? Her latest incarnation of Mein Kampf says Adios, America on the front but should really be called Mexicans Are Human Garbage. I haven't read it yet but the claims she makes in the book are as disgusting as they are outrageous. It all came out on a recent appearance of Fusion with Jorge (pronounced “Hor-jay”) Ramos. As the title implies, his show brings together all kinds of different cultures into a fun plate of multiculturalism that’s like fusion cuisine for the brain. (If you don’t believe diversity is our strength, check out all the cool restaurants in New York City. You can be served by a Somalian one day, a Turk the next, and a Glaswegian in between the two.)

“Ann, if you’re reading this. Show some humanity! We are a nation of immigrants. We stole this land from the Indians."

Ramos appeared to be focusing on Hispanics throughout the episode he had Coulter on. It was a brilliant way to expose her irrational ramblings for what they really are: Shock Hate. I haven’t actually seen the entire episode but the Internet is rife with apt descriptions of what happened. The show started out with Ann being repulsed by a Hispanic woman of color who simply offered her a hug. After that, a documented boy from Honduras tried to reach out to her and open her eyes to the dangers of prejudice and Ann barked, “You’re not black so drop the racism crap.” Her hatred for Mexicans ran so deep, she couldn’t talk to any of the audience members. Ramos rescued them from her vile bile and bravely took her on himself. He told her America was becoming more diverse and she said, “more Mexican” is not more diverse. He asked her what her problem is with 11 million hard-working people and she said the number was 3 times that! She also said they’re not as nice as we think. “If you don’t want to get killed by ISIS, don’t go to Syria” she said before adding, “If you don’t want to be killed by a Mexican, there’s nothing I can tell you.” I mean, at this point you have to just give up. Even conservatives know the Hispanic crime rate is the same as that for whites. In her world, Mexicans don’t come here for a better life. They come here to murder people.

Ann, if you’re reading this. Show some humanity! We are a nation of immigrants. We stole this land from the Indians. Mexicans aren’t doing the same to us. They’re here to help us. Do you want us to put them all on a giant bus and send them home? Grow up!

Actually, I had some time to kill so I figured I should double check if Ann is as batshit crazy as we all think. I watched the episode of Fusion everyone’s talking about. The woman who asked for a hug was told quite clearly Coulter had been sick and was still having symptoms. Even if she wasn’t, since when is a guest expected to hug audience members? As Megyn Kelly pointed out, Coulter is a woman who has to hire security every time she does a talk. The Honduran who Ann yelled at had been wasting her time for what seemed like forever. His question itself lasted a full minute and he kept interrupting her answer complaining about racism. He looked about as white as the Spanish conquistadors who stole his country from the Maya. Both audience members wanted to relay their own personal stories like such a thing would destroy her observations about a group involving tens of millions. How frustrating. Don’t these people know that anecdotal evidence means nothing? If you know a short, fat, white man in the NBA, it does not mean tall, black men don’t tend to be better at it. As my colleague Michael Malice says, “You are one data point.”

The more I looked into the immigration debate, the more hate turned into facts. I checked out Ramos’ 11 million number and it comes from a decade ago. The Washington Post claims we have about 700,000 crossing per year, but even their info seems skewed. It’s not easy looking up these figures for some reason, especially in the New York Times. Immigrants to America from all countries keep getting lumped in and the definition of Hispanic keeps changing. Something fishy is going on and the crime data was especially hard to look up. I managed to find that Pew says crime for the second generation of immigrants tends to be much higher than that of their parents but there was little else on the subject. Taki’s own Jim Goad dug up a lot of Hispanic on black crime but his article spent a lot of space discussing how hard it is to find this information.

The whole “put them all on a bus” thing appeared to be a misnomer too. The Center of Immigration Studies has noticed the solution is much simpler: attrition. Simply by tweaking the system just a bit and making it slightly less easy to hire illegals – simply by glorifying this flawed process a little less, the illegals tend to go home on their own volition. (Incidentally, when Mexico discovers illegals they literally do put them on a bus and send them home.)

Eventually, it became impossible not to pick up Adios, America. Immediately after, the pieces of the puzzle started to fall into place. In the chapter “Carlos Slim: The New York Times’ Sugar Daddy” we learn why the Times prefers platitudes to data. Slim is the world’s richest man and after saving the paper from bankruptcy, fluff pieces on Carlos began to appear as well as diligent exposes on the merits of illegal immigration from which Slim benefits greatly. He’s a telecom baron so calling home and sending money back provides him with exorbitant cuts each time.

The real wake-up call in the book are the crime statistics. “You will spend more time trying to obtain basic crime stats about immigrants in America than trying to sign up for Obamacare” she writes. In the “Immigrants and Crime” chapter we learn the government has extensive data on the exact count of Samoans without battery-powered radios (2,651 in 2010) but very little on immigrants and crime. The data that is there gets skewed by conflating Hispanic with white and excluding cases such as children born to illegals and immigration detainees.

When she finally breaks through to real numbers we discover Hispanics committed half the murders in Texas in 2014 (a stat Northeastern University professor Ramiro Martinez Jr. claims to have refuted simply by saying it “boggles the mind”). Ann finally finds the big answers such as, “Foreign inmates are 70% more likely to have committed a violent crime than American criminals.”