Sounds so radical doesn’t it? Isn’t the Federal Reserve there to smooth out the economy, to stabilize the currency? To make sure the world doesn’t blow up?

What if I told you that it doesn’t smooth out the business cycle, but exacerbates it. That the dollar has lost 95% of its value since the establishment of the Federal Reserve. And that the world has “blown up” multiple times under the Fed regime? The world is worse for having the Fed in it.

A reasonable person might ask, “Well, I don’t buy it. That’s not what I’ve been told. Wouldn’t things have been even worse without the Fed?”

No. The Fed is the reason we have so much economic instability, and why the world economy is prone to long periods of sub optimal performance. The Fed juices the economy to counter what it perceives as downturns. In so doing it creates malinvestment while times are “good.” When (artificially) easy money flows businesses and governments make stupid decisions. They leverage themselves out too much, much more than if the market set the overall rates of interest. They build where they shouldn’t build. They loan money to people they shouldn’t loan money to. And eventually all this malinvestment crumbles on itself and creates a recession or depression.

Sadly the Fed doesn’t then just abolish itself in the face of another failure. No, it is usually during these times where the Fed, the very entity which has created the problems in the economy, gains more power as politicians scurry around trying to look as if they are solving the country’s economic problems.

The Fed screwed up by keeping rates too low for too long. The banks took advantage of the easy money.Then the big banks came tumbling down – really just a reversion to the mean. Then the Fed bailed out the banks and in the process expanded its power.

It’s as if America has fallen into a Stockholm Syndrome induced trance. The Fed has captured the economy and after 100 years the general public (and Washington) now look to its captor for economic answers. We know nothing else. Won’t the world end if we take off the chains the FOMC has told us protect us? What if we decided to be free?

Nope, nope, too scary to contemplate. The wizards at the Fed will take care of things.

The so-called wizards, are just men and women. They are prone to mistakes (obviously.) But because the Fed has such massive power when these men and women made of flesh and blood mess up, they mess up the whole world. No political entity should ever be able to do this.

The Fed is far too powerful. It’s time to stop identifying with our captors and to put the bank in its place, which is to say in the dustbin of history.

From The Free Foundation:

A week from now, the Federal Reserve System will celebrate the 100th anniversary of its founding. Resulting from secret negotiations between bankers and politicians at Jekyll Island, the Fed’s creation established a banking cartel and a board of government overseers that has grown ever stronger through the years. One would think this anniversary would elicit some sort of public recognition of the Fed’s growth from a quasi-agent of the Treasury Department intended to provide an elastic currency, to a de facto independent institution that has taken complete control of the economy through its central monetary planning. But just like the Fed’s creation, its 100th anniversary may come and go with only a few passing mentions.

Like many other horrible and unconstitutional pieces of legislation, the bill which created the Fed, the Federal Reserve Act, was passed under great pressure on December 23, 1913, in the waning moments before Congress recessed for Christmas with many Members already absent from those final votes. This underhanded method of pressuring Congress with such a deadline to pass the Federal Reserve Act would provide a foreshadowing of the Fed’s insidious effects on the US economy—with actions performed without transparency.

Ostensibly formed with the goal of preventing financial crises such as the Panic of 1907, the Fed has become increasingly powerful over the years. Rather than preventing financial crises, however, the Fed has constantly caused new ones. Barely a few years after its inception, the Fed’s inflationary monetary policy to help fund World War I led to the Depression of 1920. After the economy bounced back from that episode, a further injection of easy money and credit by the Fed led to the Roaring Twenties and to the Great Depression, the worst economic crisis in American history.

But even though the Fed continued to make the same mistakes over and over again, no one in Washington ever questioned the wisdom of having a central bank. Instead, after each episode the Fed was given more and more power over the economy. Even though the Fed had brought about the stagflation of the 1970s, Congress decided to formally task the Federal Reserve in 1978 with maintaining full employment and stable prices, combined with constantly adding horrendously harmful regulations. Talk about putting the inmates in charge of the asylum!

Now we are reaping the noxious effects of a century of loose monetary policy, as our economy remains mired in mediocrity and utterly dependent on a stream of easy money from the central bank. A century ago, politicians failed to understand that the financial panics of the 19th century were caused by collusion between government and the banking sector. The government’s growing monopoly on money creation, high barriers to entry into banking to protect politically favored incumbents, and favored treatment for government debt combined to create a rickety, panic-prone banking system. Had legislators known then what we know now, we could hope that they never would have established the Federal Reserve System. 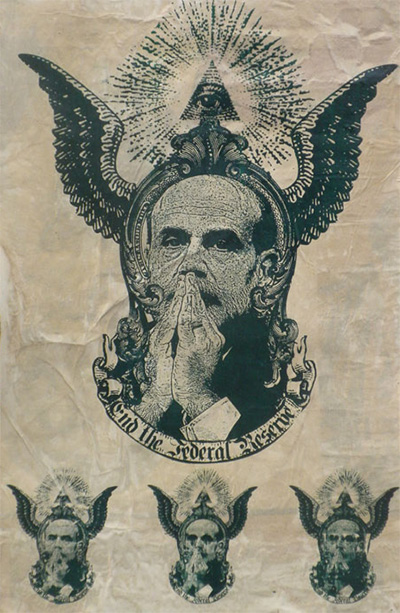