A reader passes along a government document putting out bids for a contract. Here’s the top of the document: 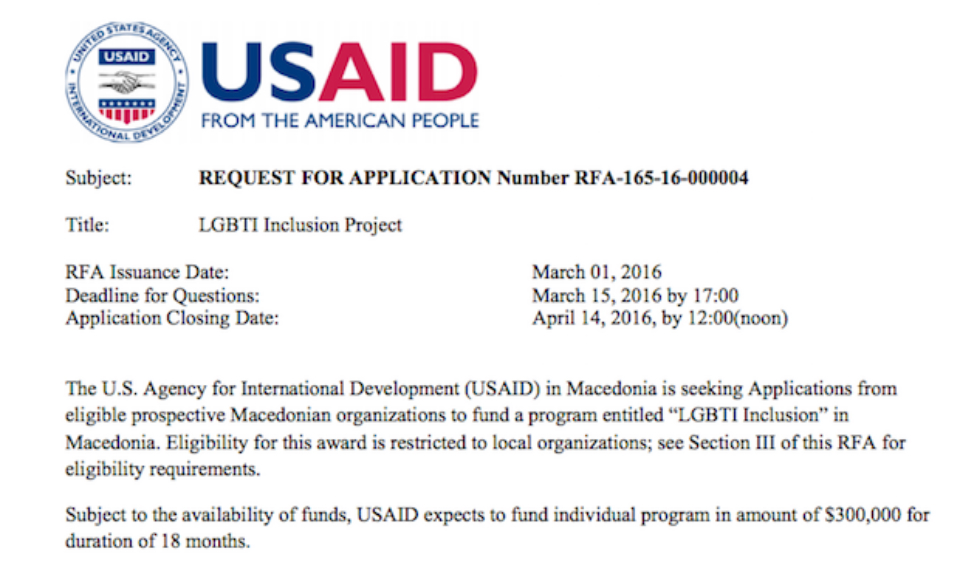 Apparently the (former Yugoslav) Republic of Macedonia, a small Balkan nation that emerged from the breakup of Yugoslavia, is insufficiently progressive on LGBT issues. So the American government is spending $300,000 to undermine the traditional Orthodox Christian culture of the country. Excerpts from the document (emphases mine):

Macedonia has ratified the Universal Declaration of Human Rights and the European Human Rights Convention. Through ratification of these human rights treaties, Macedonia has assumed obligations and duties under international law to respect, to protect, and to fulfil human rights. Despite the adoption of international human rights principles, which are incorporated in domestic legislation, Macedonia has made little progress towards meeting European Union criteria in strengthening the rule of law and respect for human rights according to international reports. In these terms, the country has still not met the necessary requirements for EU membership. The 2015 EU Progress Report notes that “Lesbian, gay, bisexual, transgender and intersex (LGBTI) persons continue to suffer discrimination and homophobic media content, both online and offline… Considerable efforts are still needed to raise awareness of and respect for diversity within society and to counter intolerance. This needs to be done through public campaigns and training of law enforcement bodies, prosecutors, judges and health workers.”

What does this mean? Are radio stations calling for pogroms against LGBTs? Or are newspapers simply calling on readers to hold fast to the traditional teaching on marriage? It’s impossible to say without further information. The diversocrats slap the Orwellian word “homophobia” — as if the pathology of fear were the cause of any belief that falls short of 100 percent affirmation. Similarly, we know from our own experience that when the Left says “respect for diversity,” it means “you will accept what we believe about LGBT, and cast aside your religious beliefs.” Macedonia is a country that is 2/3 Orthodox and 1/3 Muslim. I could be wrong, but I would not be surprised if many people there hold beliefs about LGBTs that would trouble even conservative Christians in the West. But we can be certain that as far as USAID is concerned, any belief about homosexuality and transgenderism short of what obtains in the offices of the Human Rights Campaign and the English faculty at Oberlin must be stamped out. More:

The LGBTI community is systematically discriminated against. The 2013 Macedonian Helsinki Committee Report on Hate Crime Incidents concludes that youth and members of the LGBTI community are the most affected members of society owing to the fact that sexual orientation and gender identity are not recognized grounds on which hate crimes can be perpetrated. Bias motivated crimes are not properly reported or investigated by the police. Relevant practitioners do not receive training regarding the identification and response to hate incidents. By not treating the hate crimes phenomena as a separate issue, the state does not offer special protection and support to victims.

Wait, so because the country’s legal system does not single out LGBTs for “special protection and support” when they are physically attacked, that means it’s homophobic? There are lots of people in this country (like Andrew Sullivan) who find the concept of “hate crimes” philosophically and morally problematic, and inherently ideological. If Macedonia has hate crime designations for violence against other groups but not LGBTs, then that’s a problem. But is it really a problem that’s the business of the United States to solve?

The LGBTI community in Macedonia faces numerous challenges, as noted in international reports. In May 2015, the International LGBTI Association, which rates European countries according to how fully they respect the human rights of and grant full equality to the LGBTI community, ranked Macedonia as 43rd out of 49 countries, the worst score in the Balkans. The community suffers from discrimination, physical violence, lack of legal protections, and use of derogatory language in the media, government, and society. The situation is particularly dire for rural LGBTI persons and youth. Exacerbating these problems is the ruling party’s promotion of a socially conservative, exclusionary agenda that relies on traditional gender ideology.

Well, there you are: sounds like the government of this traditionally Orthodox country promotes what the Orthodox church teaches about sexuality and gender, and what human beings have believed for time immemorial. And that is something the United States government will not tolerate, and in fact hates so much that it is planning to spend $300,000 to send in agents to undermine faith and family in a small Balkan nation. Cultural hegemony, liberal-style. Does Washington hire culture-war mercenaries to go into countries like Saudi Arabia and Qatr to spread the gospel of sexual diversity? Or do they just do this to countries too small, poor, and powerless to resist?

The objectives of the program are:

2) Ensuring a safe place for vulnerable members of the community;

3) Developing institutional capacity by facilitating networks and the engagement of the LGBTI community members with each other (nationally and regionally), the broader CSO community, and local and national institutions; and

“Exclusionary narratives”? I suppose we should call the nearest Gender Studies faculty to find out what that means, but it’s pretty clear that US taxpayer dollars are being used to hire culture-war mercenaries to go into a Christian country, in complete disrespect for its religious belief and traditions, and destabilize them.

And if Washington finds traditional Christianity so threatening abroad that it’s willing to spend taxpayer dollars to hire Social Justice Warriors to fight it, what do you think the future holds for traditional Christianity in our own country? You had better start preparing  yourself, your family, and your community for the resistance. The New York Times today has a story about Iowa’s conservative Evangelicals trying to come to terms with their losses. It focuses in part on the Odgaards, an older couple who had to sell their business because they would not rent out the chapel inside it to a gay couple for a wedding. “It all flipped, so fast,” one of them said.

It did. And it’s not flipping back, even if Donald Trump is elected president. It’s a new world now. The US Government is positioning itself as the enemy of traditional Christians, (and Jews, and Muslims) with our “hate speech” and “exclusionary narratives.” That’s a big reason why I wrote The Benedict Option.