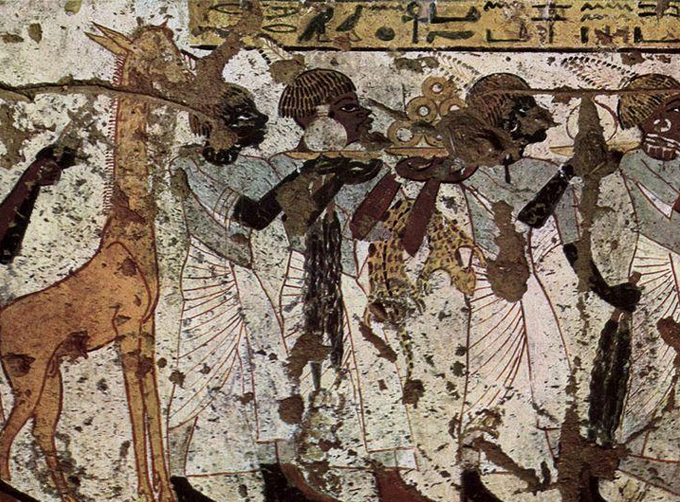 "What was once a rich and diverse mammalian community is very different now," the study’s lead author Justin Yeakel said.

Some six millennia ago, 37 species of large-bodied mammals roamed the deserts and river valleys of modern Egypt. Today, there are only eight. And as new research shows, ancient Egyptian art has helped tell the story of ecological loss in North Africa.

Among the animals depicted in the paintings of Egypt’s Predynastic Period, the period prior to 3,100 BCE, are lions, wild dogs, elephants, oryx, hartebeest, and giraffe. This art is not only beautiful, but scientifically valuable.

Using Egyptian art, researchers at the University of Bristol, in the United Kingdom, were able to fill in gaps in the ecological timeline -- a timeline, that until now, has been primarily informed by paleontological evidence.

This newly detailed timeline has offered scientists a better understanding of the consequences of extinctions over time. What researchers found is that extinctions have a compounding effect. Early in history, when biodiversity was high, a single extinction had a limited impact. Over time, as the animal community featured fewer and fewer species, a single extinction proved to have a larger and larger impact on the ecosystem’s health.

"What was once a rich and diverse mammalian community is very different now," the study’s lead author Justin Yeakel said. Yeakel completed most of his research as a graduate student at the University of California, Santa Cruz, but is now a postdoctoral fellow at the Santa Fe Institute.

"As the number of species declined, one of the primary things that was lost was the ecological redundancy of the system," explained Yeakel. "There were multiple species of gazelles and other small herbivores, which are important because so many different predators prey on them."

"When there are fewer of those small herbivores, the loss of any one species has a much greater effect on the stability of the system and can lead to additional extinctions," Yeakel added.

The study was published this week in the Proceedings of the National Academy of Sciences.