The event – entitled “It’s OK to be Against Whiteness” – drew ire shortly after it was revealed the campus lecture would centre around the existence of “white privilege.”

“You are inciting hatred against an identifiable group (Caucasians),” complained one social media user, adding “stop embarrassing the university.”

“What a joke university to put on an event like this,” another Facebook user added. “Parents, save your money and don’t send your children … There should be a boycott.” 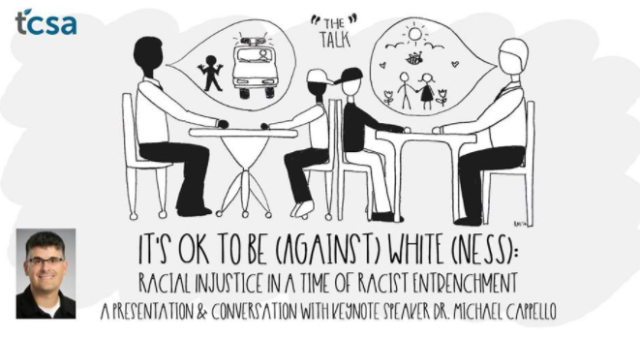 The anti-“whiteness” event is headlined by Dr. Michael Cappello, an assistant professor in the Faculty of Education at Regina University. The TCSA describes Cappello as “an anti-oppressive educator.”

The divisive title of the event is in response to the “It’s OK to be white” posters that emerged on Canadian university campuses last year.

“These posters had a divisive and offensive message and were revealed to be tied to white nationalist agendas,” the TCSA wrote in response to questions being raised about the March 12 event.

The “It’s OK to be white” posters were believed to be a gag, cooked up by trolls on the message board 4chan with the intention of kicking off a media firestorm. 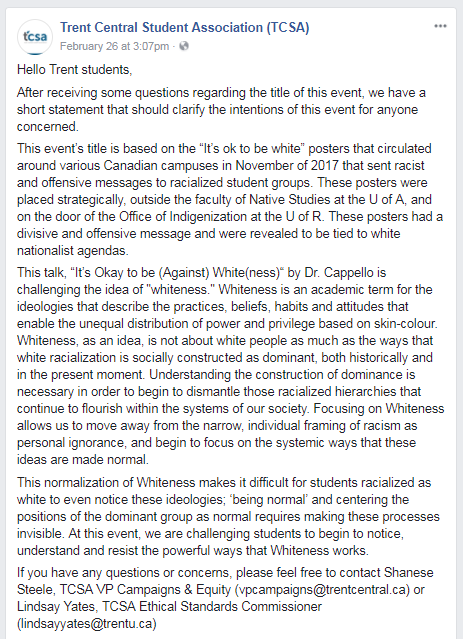 “Whiteness is an academic term for the ideologies that describe the practices, beliefs, habits and attitudes that enable the unequal distribution of power and privilege based on skin-colour,” it read. “Whiteness, as an idea, is not about white people as much as the ways that white racialization is socially constructed as dominant, both historically and in the present moment.”

Shanese Steele, who’s listed as a contact for the event on the TCSA’s Facebook post, claimed Thursday the group has received threats for promoting the event.

“But we’re the problem right?” Steele wrote to Facebook. “People asking white folks to unpack their privilege and the way in which they historically and contemporarily have used it to oppress others is the problem?”

The TCSA’s Ethical Standards Commissioner didn’t immediately respond to a request for comment.

News of an anti-“whiteness” event at Trent comes weeks after Dalhousie University in Halifax received criticism for a job posting that appeared to limit the application process to non-whites.