Aug 28, 2009 Source: examiner.com
Could UFOs be behind the mysterious technical failures on board NASA’s lunar bombing mission craft? 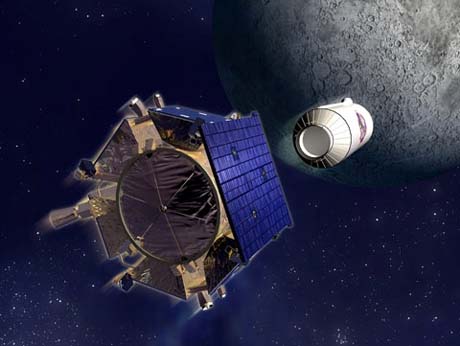 NASA's moon-colliding probe LCROSS lost more than half its propellant late last week after a glitch caused it to repeatedly fire its thrusters to try to orient itself. But the spacecraft is still on track to complete its mission to slam into the moon's south pole in October.

The Lunar CRater Observation and Sensing Satellite (LCROSS) took off on 18 June and has been orbiting the Earth at about the moon's distance in preparation for a lunar collision on 9 October. NASA hopes the impact will excavate material from one of the moon's permanently shadowed craters, which could be rich in water that could supply future lunar outposts .

Mission managers made contact with the spacecraft on Saturday to conduct a 'cold-side bake'. This manoeuvre flips the spacecraft to allow the sun to heat up and vaporise any residual water on the 2400-kilogram upper stage of LCROSS's launch rocket, which will be sent crashing into the moon four minutes before the LCROSS spacecraft itself.

"It was pretty apparent that the thrusters had been firing for quite a bit," says LCROSS project manager Daniel Andrews of NASA's Ames Research Center in Moffett Field, California.The fuel was lost after a fault in one of the spacecraft's data lines caused a change in the probe's control system. It switched from the craft's Inertial Reference Unit (IRU), which uses spinning gyroscopes used to gage the spacecraft's orientation, to a less precise star tracker, which orients the probe by observing the position of stars.The spacecraft made an effort keep up with these noisier star tracker data, causing it to rapidly burn through fuel to keep up with the heavily fluctuating numbers.The switch was triggered by a change in an indicator used to monitor the health of the IRU.

The fault, which lasted just one second, may have been a passing glitch. But mission operators have not been able to eliminate the possibility that there is a problem with the IRU.

"We're not 100 per cent convinced that it isn't a sign the IRU is about to fail," Andrews says.If the unit does fail, LCROSS can fall back on the star tracker for orientation information. The team is working on re-tuning the spacecraft so it does not respond as attentively to information from the unit.The spacecraft has also been reprogrammed to switch from the IRU to the star tracker only if problematic signals last for at least five seconds, a change that should cut down on LCROSS's sensitivity to fleeting glitches, which may be more then a simple anomaly.

NASAs’s top technicians and engineers may not not fully understand what is causing technical difficulties with this particular project but many UFO researchers and enthusiasts have suspected that perhaps our alien brothers may be interfering with the mission and for good reason. The plan again is to plunge a 2 ton kinetic weapon into the dark side of the moon most likely in the area of where the alien moon bases have been reported by creditable former astronauts like Dr. Edgar Mitchell and a few others.

Once again as raised the question in an earlier article,……could this be initiating a conflict with alternate species who may have been established on the moon prior to the human race. Does NASA or any other organization on Earth actually believe that the moon belongs to the human race?

Many concerned individuals will be watching the event with whatever means possible scheduled to take place on October 9th 2009. ….Try not to miss it. This may be the biggest fireworks show in Lunar history. Hopefully the results will not be catastrophic.

Portions of this article have been referenced from NewScientist.com.

The discovery of life on Mars with Andrew D. Basiago

Andrew D. Basiago the Discovery of Life on Mars

The High Strangeness of Dimensions, and the Process of Alien Abduction