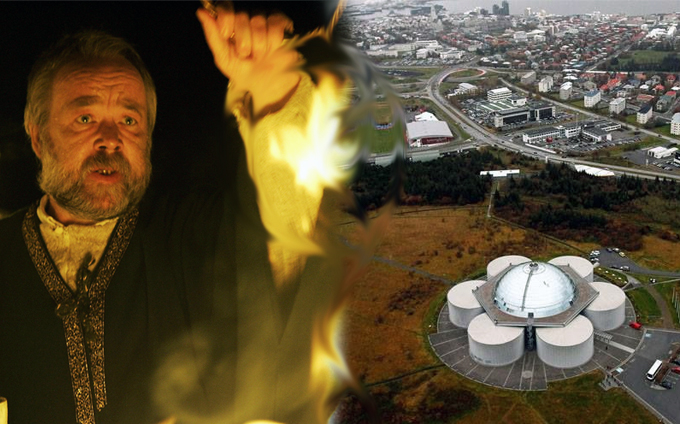 Icelandic Magazine recently covered this project and revealed a picture of Öskjuhlíð with the story, where Perlan is rather prominent. Hilmar says that consequently people abroad thought that Perlan was the new chief temple.

Believers of the old Nordic gods get a chief temple:

The goal is a 800 square metres building

The Asatru Community was formally founded on the first day of summer in the year of 1972 og a year later, on May the 16th in the year of 1973, it was recognised as a legal, religous community. At the website of the community, it is stated that its purpose is the enhancing of the belief in the old Nordic gods and managing the religious service concurrent with it and the community wants to achieve this by educational club activities, not by a mission.

As previously mentioned, this is the first chief temple of the Asatru community in the Nordic countries for ca. thousand years, or since the temple in Uppsala in Sweden was burned to the ground in 1070. Hilmar says the the building of this new chief temple lends a completely different image of members of the Asatru community. "This is a historical event. I think that we will greatly benefit from this in the future," Hilmar says.

A woodcut depicting the Temple at Uppsala as described by Adam of Bremen, including the golden chain around the temple, the well and the tree, from Olaus Magnus' Historia de Gentibus Septentrionalibus / A Description of the Northern Peoples (1555).

The Temple at Upp Sal / Ub Sola (Uppsala) in Västergötland, Sweden should be rebuilt to commemorate Scandinavia's true Asatro heritage. Don't be fooled and think that today's Uppsala in Uppland near Stockholm is the site where the original Temple was built. Östra Aros was renamed to Uppsala by Olof Rudback in the 17th century as a meassure by the Stockholm-centric church to confuse, disrupt and destroy the true Norse heritage and history of the Northern lands. They tried to rewrite history and relocate Uppsala to a spot that had no connection to the ancient temple site at all. There has been many other finds at Old Uppsala, near Stockholm, indicating that it was an important site, yes, but no evidence for an ancient heathen temple has ever been found at this location and the geographical description does not fit either.

There are other old place names in Sweden called Uppsala:

This is a road sign, standing to this day showing you where THE Uppsala (Ub Sol / Upp Sal) is located. It is in the Ledsjö parish in Västergötland, Sweden.

For more information see :Where was Uppsala? (A page translated by Google, so not 100% correct English on this page.) 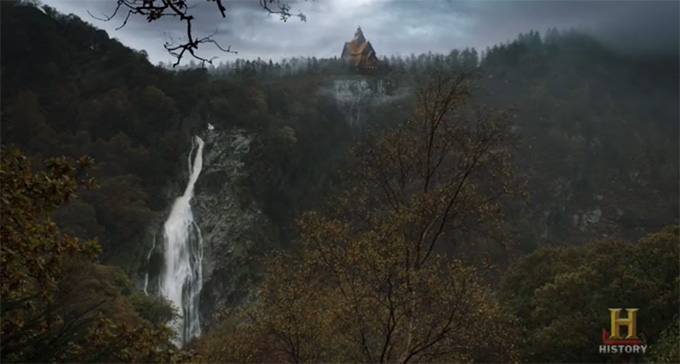 The Temple as depicted in Episode 8 of Vikings.

The temple will be the venue for the activity of the Asatru Community, traditional affairs, Asatrú weddings and funerals. Then it is also the plan to hold concerts and all kinds of promotional presentations.

Hilmar expects more visitors from abroad due to the temple. "We expect that the image of the community needs to be enhanced with promotional material and other things like that, the entrance will include a gallery and multimedia material for historical and traditional presentation," Hilmar says, but the blue print for the latter stage of the project includes a scholar studio.

"Then we would invite a foreign party who is studying mythology to stay there and have this facility."

He says that there has been an increasing interest from abroad for the last few years and that the interest has even been more abroad than in Iceland in the beginning. "But this is now expanding year by year," Hilmar says.

Some people have wanted to connect this increased interest from abroad to films like The Lord of the Rings and especially Marvel's superhero movies about the thundergod Thor. "I think it definitely helps,“ Hilmar says when asked about the Marvel's films where Thor is either a leading figure or a part of the superhero team The Avengers, but those movies are among the highest-grossing movies in recent years.

"I believe that it plays a role, but I don't think that there is something starting a revolution, more of a sweet and an amusing addition," Hilmar says and is not worried that an American fiction on Thor results in an misunderstanding of the belief in the old Nordic gods. People in Iceland are at least not correcting people abroad who are interested in this.

(How sad those crappy Hollywood nonsense movies inspires people. When will the REAL sagas be made by a European studio OUTSIDE Hollywood control?)

"Only laughed at this“

"I think that people normally do it for us. Some members of the belief in the old Nordic gods in the US got mad, wanted to shun the movie and make some trouble. We've only laughed at this. This is nothing to worry about," Hilmar says.

He only finds fault with one thing concerning this popularisation of Thor and that is how the Brit Kenneth Brannagh played the thundergod in the first film, titled Thor. "I've said that is is a shame that Kenneth Brannagh was more given to Shakespeare than the Edda poems, but dramatically this was well done."

Robert Ferguson - Hour 1 - The Hammer and the Cross: Vikings and Christianity